Instead of the cancelled Blues Pub Tour, BluesinWijk and theatre Calypso organized a small blues festival on November 28 with three blues acts, each playing a set of over half an hour and together providing a show of about two hours. With Robbert Duijf (winner of the Dutch Blues Challenge 2019), the Belgian duo Blame it on Vinnie (with a.o. the former Howlin’ Bill frontman) and blues band Chicago Capitols. 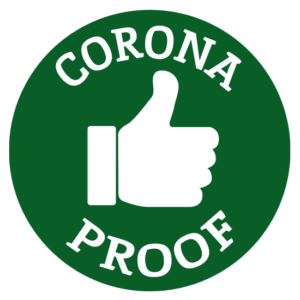 Sold out three times.With some 90 visitors, it is easy to sell out, but in Corona time, three performances in one day is the most feasible and just about break-even. For weeks, the seven musicians had been preparing for this mini-festival. Many of their performances had been cancelled due to the Corona measures and if a blues club dares to do so, then you go all the way and give it your all.  All the pent up Corona energy came out and made sure that the visitors could fully enjoy a more than great blues evening. 30 people in the audience, no drinks, 1.5 metres distance, very special! “It is good that we let it go on, at least something is happening and in such a small setting, it is very special and very atmospheric. Finally live blues in the theatre again” was the first reaction of theatre director Tom van Ginkel afterwards.  Good, fat blues, rock, country, beautiful ballads, entertainment and humour.  Three performances with great artists of high level and ninety more than satisfied and happy blues fans and about the musicians nothing but praise. 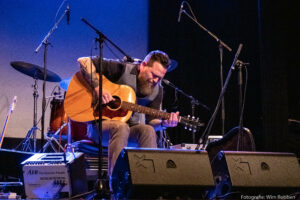 We asked a number of regular visitors for a reaction. Without exception, they were enthusiastic.Robbert Duijf, from the Province of Limburg, was described as a musician who with his voice and guitar touches you deep into your soul. Delicious bluesy ballads, many own songs, beautiful stories, excellent guitar playing, raw voice and vocals. A class on its own, who did not win the Dutch Blues Challenge in 2019 for nothing. What a stunner. Captivating from start to finish. 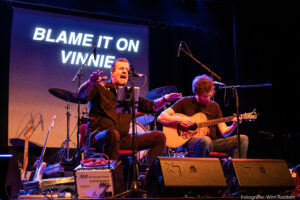 Het Belgische duo Blame it on Vinnie With a lot of humour, good singing and great guitar work, he provided a wonderful set. Many people knew singer Wim de Vos from the blues band Howlin’ Bill during the legendary New Year’s concert (2011) in the Wijkhuis. With his harmonica, beautiful voice and great stories, Wim knew how to make the audience enjoy himself and guitar player Gerrie de Waard played with feeling on the strings. How they transformed an Irish song and a Nancy Sinatra song into the Blues was also very clever.  Too bad they had to stop earlier in the third show to be in Antwerp in time for the curfew in Belgium. Also Chicago Capitols could count on much appreciation. A recently formed blues band with a lot of stage experience from the south of the country.   Three men and a woman, who can build a party with Erik van Tilburg as pacesetter. We saw him before in Wijk as the frontman of the Hoodoo Monks. Super how this stage animal with his vocals, dexterity and mouth organ completely carried away the other band members in their performance.  A great act to watch, listen and enjoy. Many a visitor would have loved to stand in front of the stage and dance along with this happy and joyful band.

Blues fan Frans Hoving put it as follows: “Finally, we could go to another blues night at BluesinWijk. I had been looking forward to this for weeks. Anton Winkel and I were sitting next to each other. We had planned to take a drink with us. But when we asked the board, it was absolutely not allowed, no alcohol on this blues night.  I must confess that I didn’t miss the drinks, but I did miss the atmosphere and the nice chat with everyone. But the music made up for everything. I experienced this performance as a private concert and it was so wonderful that it was as quiet as a mouse in the hall. The artists came into their own. Three different Blues styles from top artists.   I went home happy and sober and that at the Blues……. thank you BluesinWijk”.