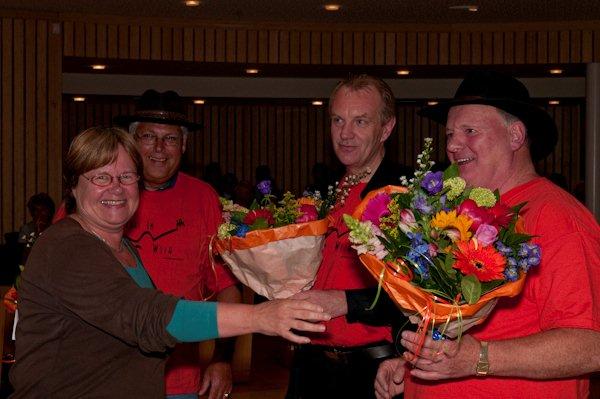 17 May: The Municipal Executive and the Municipal Council of Wijk bij Duurstede welcomed the three bluesmen to the town hall. There they were addressed by Mayor Swillens and Aukje Boer, councillor for culture, presented them with a beautiful bouquet of flowers.

15 May: On Saturday 15 May, during the award ceremony of the Kei van Utrecht in Theater Kikker in Utrecht, the three winners of the golden, silver 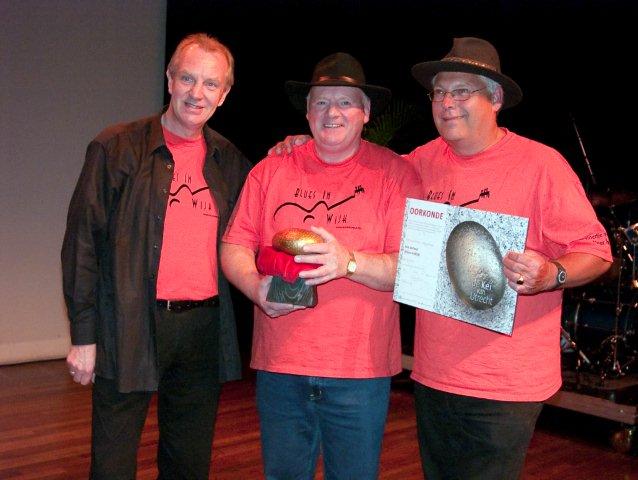 and bronze kei were announced. The jury, consisting of Machteld Smits (editor in chief RTV Utrecht), Inge Walta-auf’m Keller (member of the Provincial Executive) and Lianne Peters (director KF Hein Fonds), chose these winners after judging the documentaries made by the six finalists.The Kei van Utrecht is a provincial prize for amateur art. It is

A prize to promote and appreciate amateur art in the province of Utrecht. The prize is awarded to associations or individuals who are doing or have done something special within amateur art in the province of Utrecht. The prize is funded by the province of Utrecht and organized by ZIMIHC huis voor amateurkunst. The winner of the grand prize of EUR 3,000 is also entitled to call itself the Utrecht Kei for a year. The Golden Kei 2010 went to Arie Verheul, Frans Hoving and Anton Winkel of BLUESinWIJK from Wijk bij Duurstede. According to the jury “they win the Kei because of their enthusiasm that they managed to convey to the local public”. The cultural life of Wijk bij Duurstede has certainly become more lively as a result of their activities. They have very successfully set up the “Friends of…” system. system that works like an oil slick. In addition, they know how to interest others to later take over the baton so that Blues in Wijk can continue to grow. With the prize money, they want to organize a Blues in Wijk Academy with lectures, workshops, and performances in order to enthuse and educate the youth, who have a great interest in this kind of music. The 3 Wijkse Bluesmen were completely surprised by this 1st place, but were overjoyed to receive the prize and took the KEI from Utrecht to Wijk with the bluesbus. Zie filmpje.

27 April: The 6 finalists of the KEI of Utrecht present themselves to the jury. Their film will be shown and together with the jury they will discuss their nomination. On 15 May the prizes will be announced in theatre KIKKER in Utrecht.

10 april: RTV-Utrecht broadcasts today until 18.00 hrs 5 minutes before the full hour (13.55 hrs, 14.55 hrs etc ) the film made by BLUESinWIJK in connection with the Kei of Utrecht

31 March: (Wijks Nieuws) Last Monday night, RTV-Utrecht filmed BLUESinWIJK, one of the six finalists of the Kei van Utrecht. For this, the new house band “Little by Little” could be heard in Cafe Ome Ko during their weekly practice evening, which for this occasion took place in the cafe at the Maleborduurstraat. The winner of the Kei van Utrecht, a provincial prize for the promotion and appreciation of amateur art in the province of Utrecht, will be announced on 15 May. The videos made by the six finalists will be presented to the jury on 27 April. Bluesband “Little by Little” will perform five times during the intervals at the blues square on Saturday, June 5, during Jazz by Duurstede.(AvV). see photos.

17 March: (Wijkse Courant) The surprise for the Wijkse Bluesmen: Frans Hoving, Arie Verheul and Anton Winkel, was big when they heard that they were nominated for “De Kei van Utrecht”. A provincial prize to promote and appreciate amateur art in the province of Utrecht.  There are twelve nominees, who can be voted on via a web poll until 25 February 9.00 am. The six candidates with the highest scores after the poll closes will advance to the final round. “If we manage to reach the finals, we will have a great opportunity to let the public know what we would like to see in Wijk,” says Arie Verheul. “We hope that many people from our whole community will vote for us. Our goal is to make the Blues music popular and to bring the premier division of the Blues to Wijk. Also we want to offer Wijkse and regional bluesbands a stage to perform in front of an audience, like Radio Rental and Pauze. At this moment we have a new band practicing, Little by Little. In the autumn we are going to do a project to get the youth interested in blues music. We are also working on setting up a blues academy. With that, we want to delve deeper into the history of blues music. Let blues be seen and heard.” The Wijkse Blues Mannen organize their own blues events with contributions from a real club of friends (already 174) and sponsors. They can be proud that they have succeeded in a very short time to make the Blues alive again in Wijk. Much more information about them can be found on www.bluesinwijk.nl. A short documentary will be made of the finalists for the Kei van Utrecht. These will be shown to the jury and on RTVUtrecht. During the finals show, later this year, the public will also be able to see these documentaries and the jury will announce the three winners. There is a first prize of €3,000 and two prizes of €1,000 to be spent on an amateur art project or initiative in which the winner participates. The prize is funded by the province of Utrecht and organised by ZIMIHC huis voor amateurkunst. The jury assessing the applications this edition consists of: Inge Walta-Auf ‘m Keller – member of the Provincial Executive of the province of Utrecht (VVD) and Machteld Smits – editor in chief of RTV Utrecht (permanent jury member). After this voting round, they will choose the final winners together with Lianne Peeters (KF Hein Fonds) from the six finalists. You can cast your vote for Blues in Wijk by going to www.bluesinwijk.nl. On this site there is a box with the text “Your vote counts”. Click with your mouse on this box and you will be redirected to the RTV-Utrecht voting page. Here you will see the nominees and you can cast your vote by clicking on the circle in front of the nominee of your choice. Then click on the “send” button and your vote will bring Blues in Wijk a little closer to the finals. You can vote until February 25, 9.00 am. You can only vote once from your IP address.(Kees Broekman)

15 maart: (Wijks Nieuws) The Wijkse Bluesmen Frans Hoving, Arie Verheul and Anton Winkel were pleasantly surprised and honoured when they heard that they were nominated for “De Kei van Utrecht”. This is a provincial prize for the promotion and appreciation of amateur art in the province of Utrecht. They were one of the twelve nominees that could be voted on via a web poll until February 25. Through their blues network, friends, sponsors, family, colleagues, acquaintances and the local media, they called for votes. And that worked. Last week it was announced that they are through to the finals with 5 other clubs. It gives them great pleasure to see that the Blues is alive and well in Wijk and that people appreciate this. Their aim to finally bring the Kei van Utrecht to Wijk is another step closer. RTV-Utrecht will make a short movie of the 6 finalists in the coming weeks. These will be presented to the jury on 27 April and the award ceremony will be held on 15 May. The filming of BLUESinWIJK will be done by RTV-Utrecht on Mondaynight March 22nd in café Ome Ko in Wijk bij Duurstede. The new “house band” Little by Little will have their weekly practice night there. Interested people are welcome. 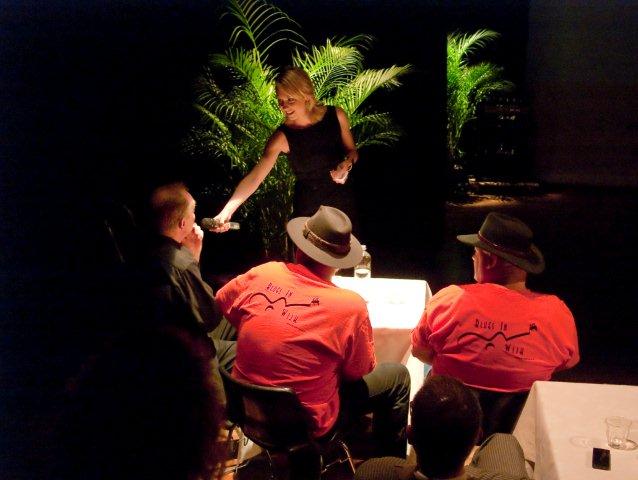 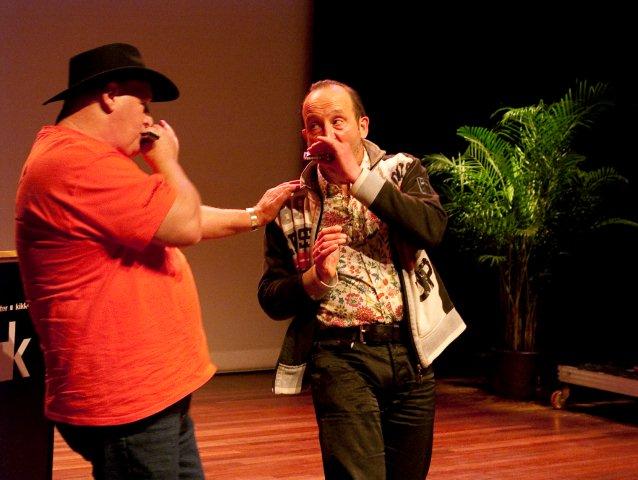 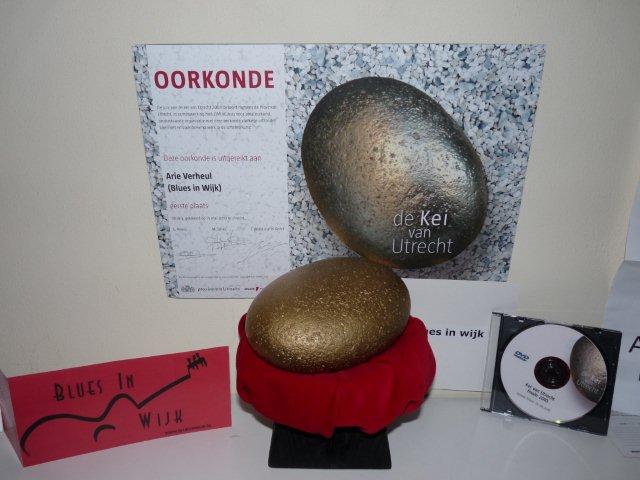