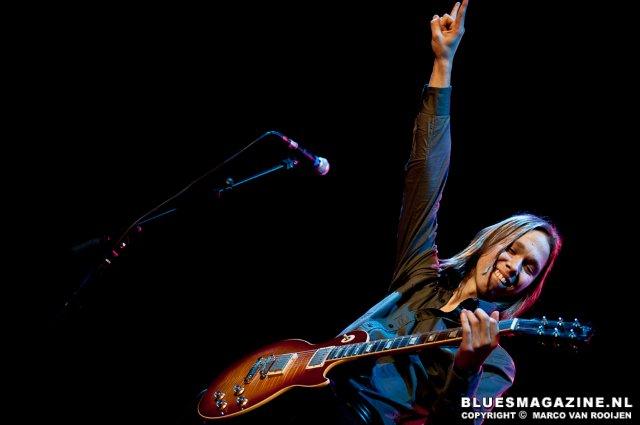 Below are some media reactions, photos and videos. 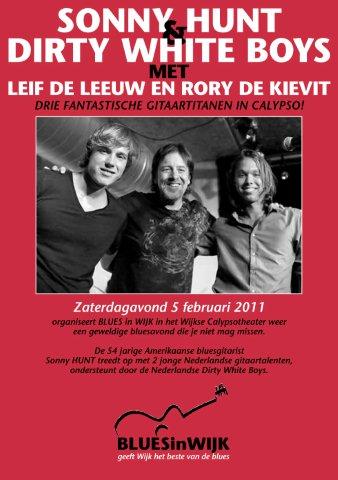 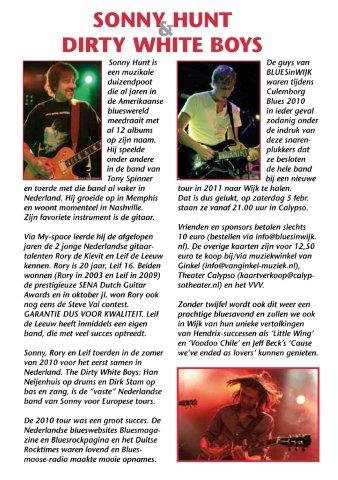 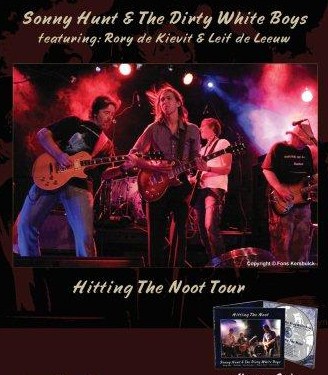 Zaterdagavond 5 februari 2011 organiseert BLUESinWIJK in het Wijkse Calypsotheatre another great blues night not to be missed. The 54-year-old American blues guitarist Sonny HUNT performs with 2 young Dutch guitar talents, supported by the Dutch Dirty White Boys. Sonny Hunt is a musical jack-of-all-trades who has been around for years in the American blues world, with 12 albums to his name. He played in Tony Spinner’s band and toured the Netherlands several times with that band. He grew up in Memphis and currently lives in Nashville. His favourite instrument is the guitar. Via My-space, he has met 2 young Dutch guitar talents in recent yearsRory de Kievit and Leif de Leeuw know. Rory is 20 years and Leif is 16. Both of them won (Rory in 2003 and Leif in 2009) the prestigious SENA Dutch Guitar Awards and last October, Rory also won the Steve Vai contestA GUARANTEE FOR QUALITY. Leif de Leeuw now has his own band, which performs with great success. Sonny, Rory and Leif toured the Netherlands together for the first time in the summer of 2010. The Dirty White Boys are Han Neijenhuis on drums and Dirk Stam on bass and vocals, Sonny’s “regular” Dutch band for European tours. The 2010 tour was a great success. The Dutch blues websites Bluesmagazine and Bluesrockpagina and the German Rocktimes were praised and Bluesmoose-radio made beautiful recordings. The guys from BLUESinWIJK were so impressed with these string pickers during Culemborg Blues 2010 that they decided to bring the whole band to Wijk for a new tour in 2011. They succeeded, on Saturday February 5, they will perform in Calypso from 21.00 hours. Friends and sponsors pay only 10 euro (order via info@bluesinwijk.nl). The remaining tickets are for sale for € 12.50 via muziekwinkel van Ginkel (info@vanginkel-muziek.nl), Theatre Calypso (kaartverkoop@calypsotheater.nl) and the Tourist Office. Without a doubt, this will be another wonderful blues evening and we will also be able to enjoy their unique interpretations of Hendrix successes like Little Wing en Voodoo Chile and Jeff Beck’s Cause we’ve ended as lovers can enjoy. 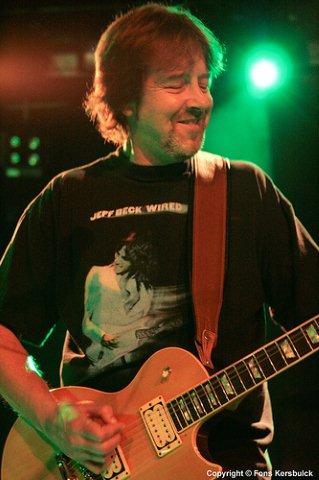 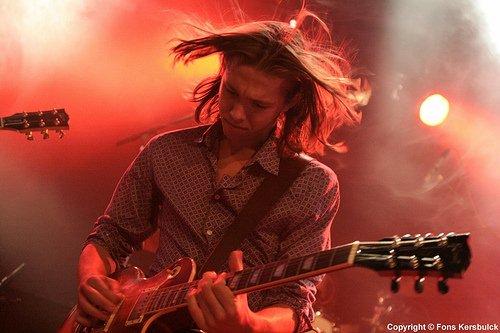 The performance of Sonny Hunt & The Dirty White Boys in Wijk is part of a short promotional tour for the new live CD “Hitting The Noot”, which will be released at the end of January.  After months of experimenting, producing and mixing, the new CD is finally ready. It is a live registration of the concert in Muziekcafé De Noot, Hoogland, on Sunday 5 September 2010. Supported by the solid rhythm section The Dirty White Boys (drummer Han Neijenhuis and bassist Dick Stam) and up-and-coming talents Rory de Kievit and Leif de Leeuw, Hunt has delivered a masterpiece! This blues CD is a blueprint of everything this band stands for: emotion, passion, playing together and colourful, catchy guitar solos but above all musical pleasure with no less than three guitarists on one stage. The goosebump moments follow each other in rapid succession.

Sonny Hunt
In the Netherlands, Hunt owes his fame mainly to his work with the Tony Spinner Band. Together with Spinner (known for his work with the world formation TOTO) Hunt has performed on various Dutch stages since 2004. With Dutch guitar giant Jan Akkerman, Hunt shines at the Rapenburg Festival in Leiden in August 2005. Afterwards Akkerman says he is very impressed by Hunt’s technical and refined guitar playing. It is friend and singer/bass guitarist Dick Stam of The Dirty White Boys who invites him in the spring of 2007 for a short tour of The Netherlands. Encouraged by the enthusiastically received performances, this was soon followed up. In 2010, the band is strengthened by the addition of two young Dutch guitar talents, Rory de Kievit and Leif de Leeuw.

Rory de Kievit
At the age of ten, Rory already picked up the guitar and within a short time he was playing songs by Joe Satriani and Steve Vai. In 2003, at the age of thirteen, he is the proud winner of the Sena Guitar Awards. In 2006, Rory released his first album. This is an instrumental fusion/rock album called “Musical Journey”. Praising reviews appear in Music Maker, among others. In 2007, Rory plays with his band (Rory MI) at the Midpoint Festival in Cincinnatti, USA. People rave about the unprecedented high level of the youngsters. In 2008, the editors of Ongekendtalent.nl proclaimed the band as the most remarkable band of that year. In 2009, he becomes the guitarist in the band of pan-flute talent Mihai and takes part in the TV programme Holland Got Talent. Highlight in 2010 is winning the Steve Vai Naked Tracks Contest in Groningen with Steve Vai in the jury! He also tours with Sonny Hunt and can be seen and heard as the guitarist of April Darby and the band Nona.

Leif de Leeuw
Leif de Leeuw is only 15 years old. But he is already being called the newest blues sensation in the Netherlands. That his talent has not gone unnoticed by other bands is shown by the fact that he was allowed to play as a guest player with, among others, the Radical Roosters, Brad Snyder, Bluesmotel, the F.O.G. Blues Band and the American guitarist Sonny Hunt. His great example Joe Bonamassa is even, after seeing a YouTube video of Leif, very impressed by his guitar playing. At the end of 2009, he personally invites Leif for a backstage meeting in Carré, Amsterdam. In that same year, Leif participates in the SENA Dutch Guitar Awards, the Dutch Guitar Championships up to 21 years of age. Considering his playing style, technique, expression and charisma the young man from Amersfoort is declared winner of the 2009 finals. Since September 2010 Leif has a band around him. They play a mix of blues/rock covers and their own material.