Significantly less paying visitors due to the 1.5 m measure are currently making it too expensive for some indoor festivals to bring 🇺🇸 bands over. The NL tour of Phil Gates in Calypso in March is unfortunately cancelled. We will try again in 2023.

Phil Gates is another blues musician who has been on our wish list for years. And suddenly we manage to book him and his band at a time when Theatre Calypso is available. On a Sunday afternoon of course.  Always a good time to enjoy a fine band. 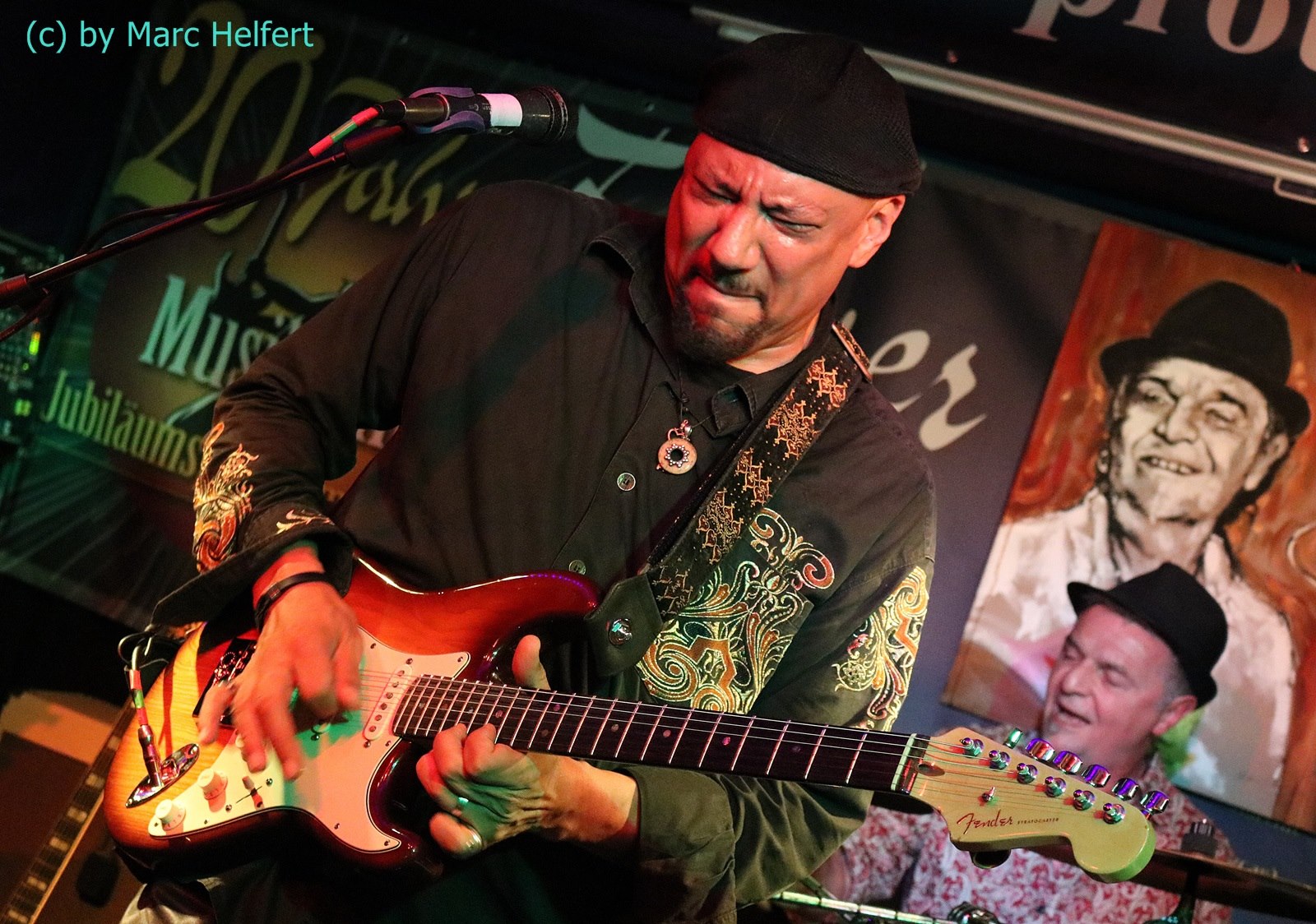 Phil Gates was born in Chicago Ill., into a family of musicians that helped form his music style, and ability. Phil began playing musical instruments at the age of eight, and listening to a wide array of music has always been his main source of inspiration. Phil has played venues from small clubs, to the U.S. Air Force’s “Tops in Blue” World Tour, which performed in sixteen countries as well as the halftime show of the NFL Superbowl.

Phil has performed at many venues all over the world with his band. Also, the band was featured for five consecutive years on Hornblower Cruise’s “Friday Night Blues Dinner Cruise”.

Phil’s style is reminiscent of the early high energy Buddy Guy, mixed with a special blend of flavors from Jazz, Fusion, New Orleans, and the Chicago, Delta, and Mississippi Blues styles.

Phil has been steady contributor to the Blues Community in Southern California. He founded the Los Angeles Blues Society, and has been a valued judge for the Blues Foundation’s International Blues Challenge in Memphis, TN, and also at many of the Guitar Center “King of the Blues” competitions in Hollywood, CA

Phil had the opportunity in his early years to listen and study great talent. As front of house engineer at the Caravan of Dreams Performing Arts Centre in Fort Worth, Texas, Phil worked with some of Blues and Jazz’s greatest performers to include: Buddy Guy, Stevie Ray Vaughn, Albert King, Dizzie Gilespie, Wynton & Branford Marsalis, Kevin Eubanks, Eartha Kitt, Dianne Reeves, Bobby “Blue” Bland, and many others.

In the studio, Phil has been busy working on the follow up to the successful releases of “Phil Gates Live in the Danube Delta”, “The Twelve Rhythms”,  “Phil Gates Live at The Hermosa Saloon”,“Addicted To The Blues”, and “In The Mean Time…” many of which, though not nominated, were all on the Grammy Ballot in their respective years as one of a few titles in their Category.

As a Producer, Co-Produced the award winning Blues record “The Blues According to Zacariah” with Zac Harmon, and recently has been a Co-Producer on a CD project with Little Richard. Phil also Produced the “Too Much Car For the Road” CD for Toni Dodd,  “Urban Legacy” CD for Julia Jordan, daughter of renowned guitarist Stanley Jordan (who also performed on the CD). Also Phil scored an AFI film “My Normal Life”. Not to mention he has many CD’s of his own music to include “This Side Of Me”, “Should I?”, “Addicted To The Blues” ,“In The Mean Time…” , “Phil Gates Live at The Hermosa Saloon”,”The Twelve Rhythms”, and Phil gates Live In The Danube Delta”- all available on Apple iTunes, and digital audio outlets world-wide.

Phil is currently the Vice President of Music and Media  for the James Marshall Hendrix Foundation. (www.jimihendrixfoundation.com).

Phil is also the Signature Band for the Sickle Cell Foundation of Orange County; for many years a strong relationship, and a great charity to help bring awareness to.

Phil is a dedicated, hard working professional entertainer that has proven time and time again, that his being dependable, and being able to work well with others can be an asset in wide array of musical endeavors.