A wonderful evening of listening blues with Michael de Jong. 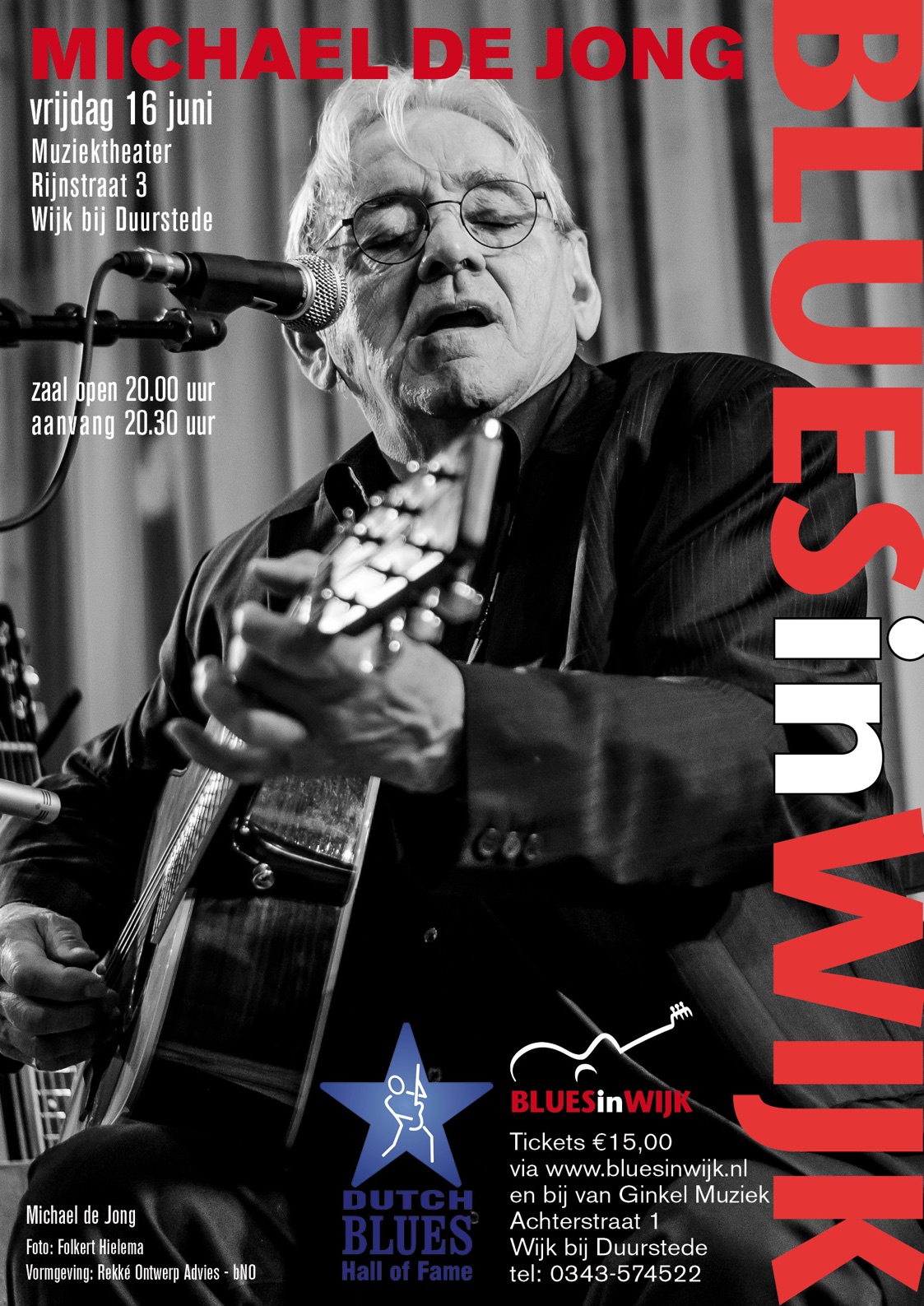 On February 18, 2017, Michael de Jong was inducted into the Dutch Blues Hall of Fame, the highest award known to the blues in the Netherlands.

During his performance on June 16 in Wijk bij Duurstede, he will be officially presented with the accompanying Award by the Dutch Blues Foundation. 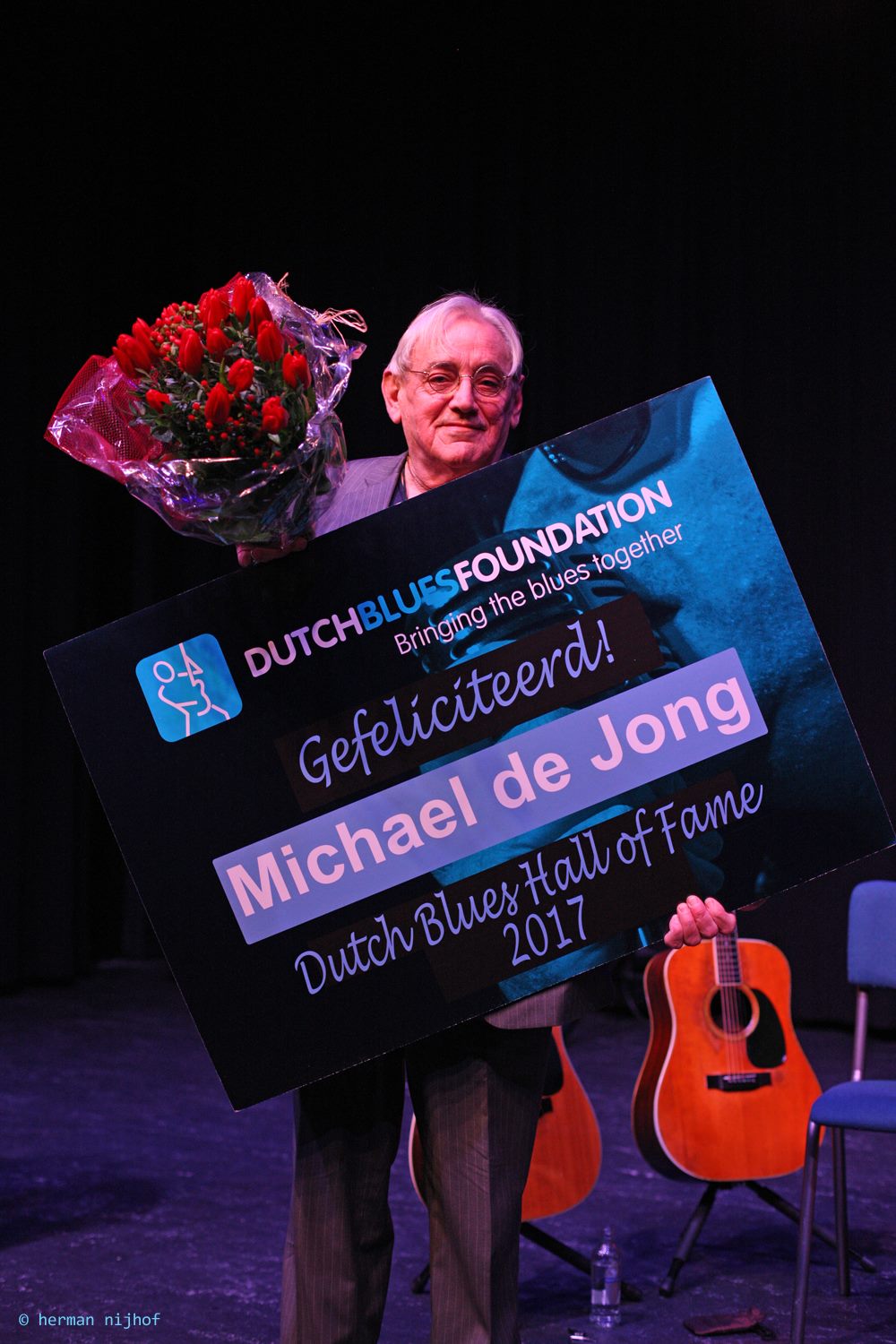 De Jong was born in France to a French mother and a Frisian father. Together with his parents, he emigrated to the United States at the age of five, where he grew up in Grand Rapids. At the age of six, he caught the singing bug through the church choir. At thirteen, he taught himself to play the guitar after attending a Johnny Cash concert – “I want to do that too”. At eighteen, he started his first band, The Nightwalkers.
In 1967, he moved to Detroit, where he performed regularly at John Sinclair’s Ann Arbor Blues Festival. Between 1970 and 1974 he travelled through the United States and finally ended up in New Orleans.  There he performed almost every night for thirteen months in the louche neighbourhood of Bourbon Street. In 1975, he settled in California, which would be his new home until 19 September 1984. There he performed with many musicians: Jerry Garcia, Paul Butterfield, Albert Collins, John Lee Hooker, Maria Muldaur, Country Joe, Charlie Musselwhite, Albert King… As if this was not enough, he then joined blues legend Jimmy Reed and band as a guitarist. At that time, under the influence of Jimmy Reed, he started writing his own lyrics.
In 1981, he recorded his first album, All Night Long. In 1984, he had enough of the American “money-grubber culture” and, swearing never to return to the United States, he returned to Europe, crossing Paris, London and Bremen to settle in Copenhagen, Denmark from 1985 to 1988. Then he settled down and left for the Netherlands. At the end of the eighties, beginning of the nineties, Michael lived a rather turbulent life in Amsterdam. The sex, drugs and blues of those and earlier days eventually took their toll and around 1992 he was pronounced HIV-positive. As he says himself, he was guilty of all sins except murder. Since then, however, he has renounced alcohol and drugs. In 1993 he settled in Dordrecht, where he still lives today in his first home of his own.
His first Europian cd was Fugitive Love Songs (Tombstone Records – 1993). Three years later, his next studio album Who’s Fooling Who was released under Munich Records. He recorded seven albums for Munich Records, often in one take. His most recent studio album was released in 2012: Life in D-Minor.
Michael de Jong’s music has not remained quite the same through the years. Whereas in his early years he was more influenced by fifties blues and rockabilly, today he mainly plays solo, a little more subdued and with a raw, lived-in voice in which love and sorrow resound, accompanied by bluesy guitar riffs. In his lyrics, he sometimes dares to denounce the decay of society, while at other times his rough life experiences and faith are a source of inspiration. He carries his father in his arms and when he has some free time, he devotes it to, as he says himself, God’s masterpiece: women. He is a strong advocate of “affordable” music. On his website, for example, he even makes unreleased albums available for free. 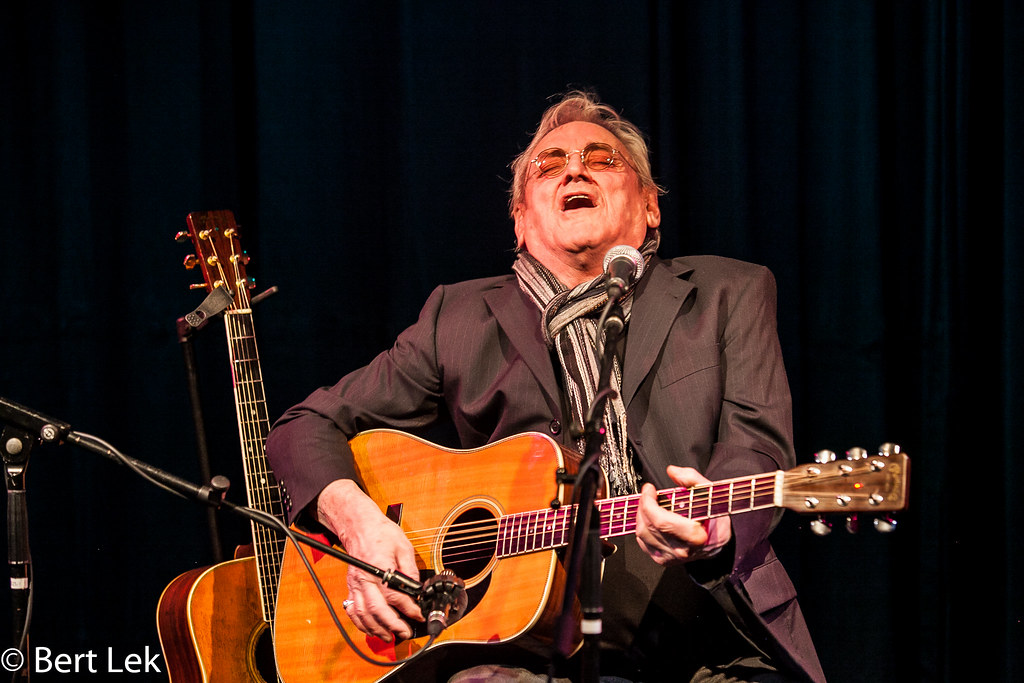 Michael de Jong in the Lingehuis at Geldermalsen on 7 February 2015: ‘An Evening With The Blues’.
Tekst: Paul Scholman / Foto’s en Video: Bert Lek
Henk Demper, The spokesman of the foundation Betuws Blues & Jazz promotion opened the evening with the announcement that the Lingehuis is available one more time for a beautiful blues evening in Geldermalsen. That will be on April 7th when Spencer Bohren will close this long series and the foundation is forced to continue in the neighbouring village Meteren. There, the ‘MFC De Pluk’ is being built, which also offers space to a concert/film hall with 92 chairs, which can be slid into the wall. When the chairs are hidden, we can have 160 standing places.
Wat can I expect Michael de Jong? I do have a suspicion. I had seen Michael once about 13 years ago in ‘Het Dak’ in Leerdam and there I was very impressed by the man. A short time later again in the small hall of Muziekcentrum Vredenburg in Utrecht, where you had a perfect sound with excellent acoustics. Michael had just released the album ‘Park Bench Serenade’ at that time. My biggest question: is he still in voice? Yes, he is, as it turns out. Michael comes on stage, sits down, finds the light a bit too bright and it is quickly adjusted for him. There is Mountain of Love, ‘an oldie’ told Michael (My version…. he says). Train Don’t Run There Anymore, a compelling melancholic song, is the next in a long line of intriguing songs.
“I NEVER use any kind of a playlist. I kind of “feel” the place out for the first song and THAT one can be a surprise (even to myself”). He sounds almost the same as he did in 2002. Of course, Michael has lost some of his power, but it is more than enough to hold you and to listen and especially to keep your mouth shut. It seems as if nobody dares to say anything, that’s how quiet it is in the sold-out venue. The Michael venom can still be found in his songs. 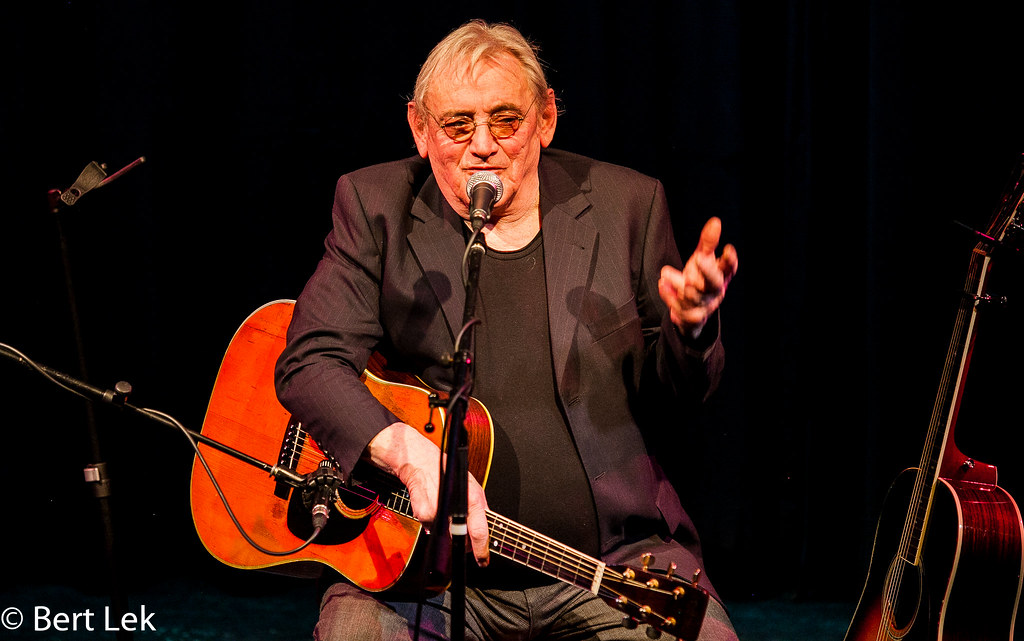 Michael takes plenty of time between songs to tune his guitars, precise as he is, but you get something in return and even during the tuning it is quiet. Much of his new CD ‘Something For The Pain’ is played. One of the many highlights is the title track of this album. A technically high quality song in which Michael cunningly plays string by string with his left hand on the neck, but in an up-tempo sort of way and then the lyrics, which are not based on rhyme schemes. It’s about something. Often it’s about how he looks at life, what he feels, what he experiences. In terms of politics, religion, pain, and everything is played with equal intensity and sung subdued, exuberantly or fiercely when it has to be, when wrongs are denounced by him.
He can also be vindictive, as it turned out. He had a conflict with Munich records, which made him decide to put his CDs from that period on his own website as a free download. Even at the end of the concert a medley of Buddy Holly with the question if it is bad that he is going to play that with possibly a mistake, but the fun splashes off. Then he also plays a solid encore where the sparks really fly off. The gratitude of the audience is a minutes standing ovation to a man who deserves a much bigger status that he has now. The Dutch Blues Foundation gets a kick out of him. I have been saying for years that the man should at least be in the Hall of Fame, that he should receive an oeuvre award, given the state of service he has built up, also on the other side of the pond where they invented the blues, but especially here in the Netherlands. He has been playing in the Netherlands for about 20 years now and has made a mountain of CDs that no bluesman or woman can match. The intensity is great, he is always original and so it never gets boring. He thinks that there were two people within these borders who were qualified for it. Harry Muskee and according to good custom and modesty Michael names himself, in my opinion quite rightly, as the number two. 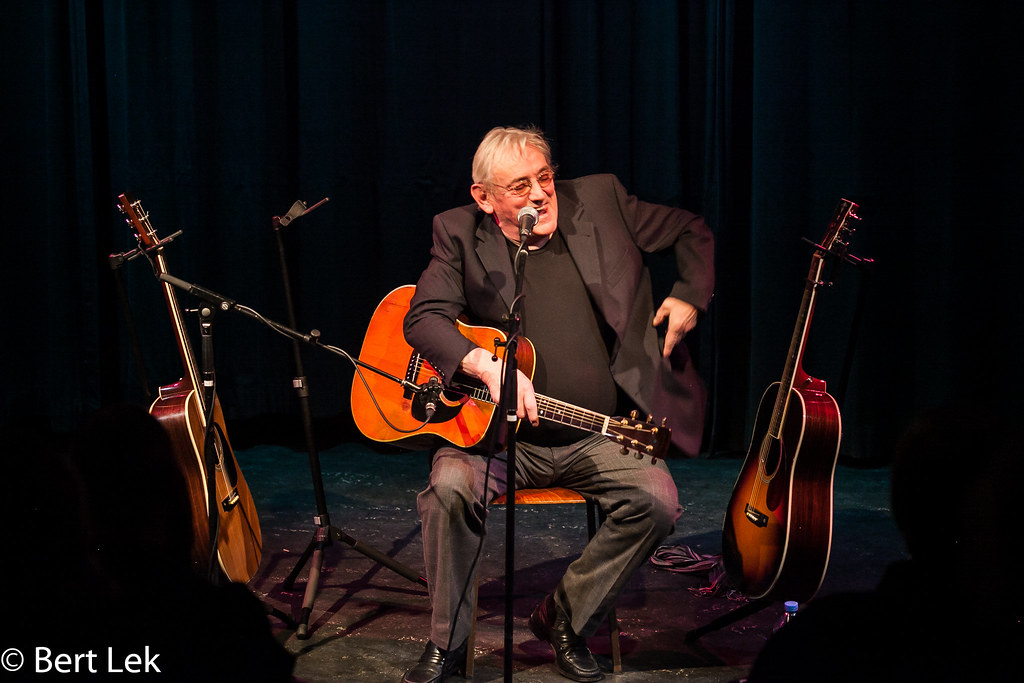 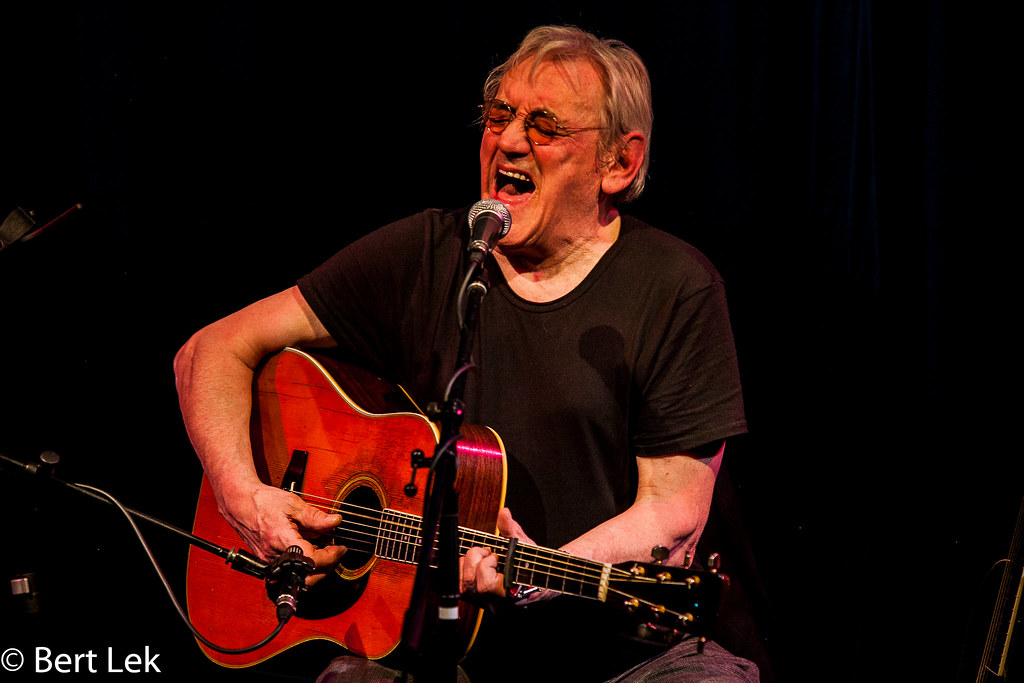 The man breathes blues and has lived on the fringes of society. On the streets, with booze and drugs, read our recent interview with him, but should he continue to be condemned and not honoured for it? If we, as a progressive blues country, want to continue to take ourselves seriously and be taken seriously by our neighbouring countries and the great country from which the blues originates, we should look at what the man has achieved and not become the laughing stock by sweeping this gem under the carpet! My opinion is that Michael de Jong should be honoured when he was alive and not posthumously! As far as I am concerned, the lobby has been restarted… Perhaps there are blueslovers who do not know him, but in the coming weeks and months they will have the chance to put that right and to appreciate him.
I have listed some remarks after the concert that do justice to this excellent evening of blues: