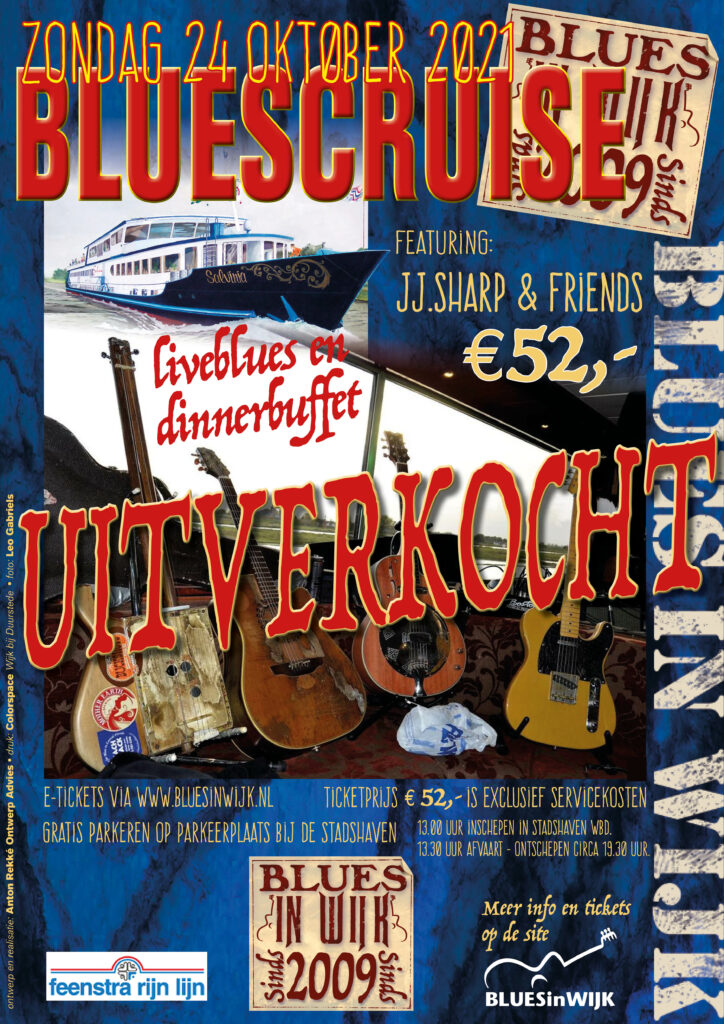 Our Bluescruises have been a great success for years with beautiful views of the beautifully green floodplains and towns along the Lek and the Rhine, passing through the locks at Amerongen, impressive landscapes along the Utrechtse Heuvelrug, cheerful atmosphere on board, great blues musicians and a fantastic buffet.View photos from our 2019 cruise here.

Free parking at the city harbor.

DUE TO ILLNESS, A FEW TICKETS HAVE BECOME AVAILABLE. CALL 06-21132560 OR MAIL TO INFO@BLUESINWIJK.NL

For a long time it was unclear whether or not the cruise could go ahead. Fortunately, the new Corona measures make it possible to once again host events without the 1.5 m spacing with up to 75% of regular admission if accompanied by a Corona admission ticket. We are happy to make use of that opportunity and in consultation with the shipping company it has been decided to let the cruise go ahead. We are very happy with that. Meanwhile, some 200 reservations have been received. They were the first to have the opportunity to order tickets in the presale.  The tickets that were still available went on sale as of October 4. For the musical interpretation, we asked blues musician Jan Scherpenzeel (aka J.J. Sharp) to provide the program. Naturally, he presented his own, recently active, Twelve Bar Blues Band, accompanied with the blues duo The Men Unplugged and guitar phenomenon Marcel Scherpenzeel. The Twelve Blues Band has been around since 2005 and grew into one of the leading bands in the Dutch blues.  They released 4-CD’s, until in 2015 the cake was finished and the band called it a day after a successful farewell tour. They received a Dutch Blues Awards for best blues band 2010 and Awards for best guitarist (Kees Dusink) and best bassist (Patrick ‘Sideburn’ Obrist). All blues-loving NL was pleasantly surprised this year with the announcement of a Reunion Tour in almost the line-up from 2015 with Jan (J.J. Sharp) Scherpenzeel (voice and harmonica), Kees Dusink (guitar),  Patrick ‘Sideburn’ Obrist (bas) en Jeffrey van Duffelen (drums).  New is the Hague guitarist Peter Langerak. Those who saw the men at work again recently are, without exception, happy to be back with their repertoire from the four CDs, supplemented by the occasional beautiful classic blues cover. In 2010 and 2011 the band had been seen in Wijk before and guitarist Kees Dusink we also saw with his then band already in 2017 at the Bluescruise and in 2016 and 2018 at BluesAtTheNeighbors. 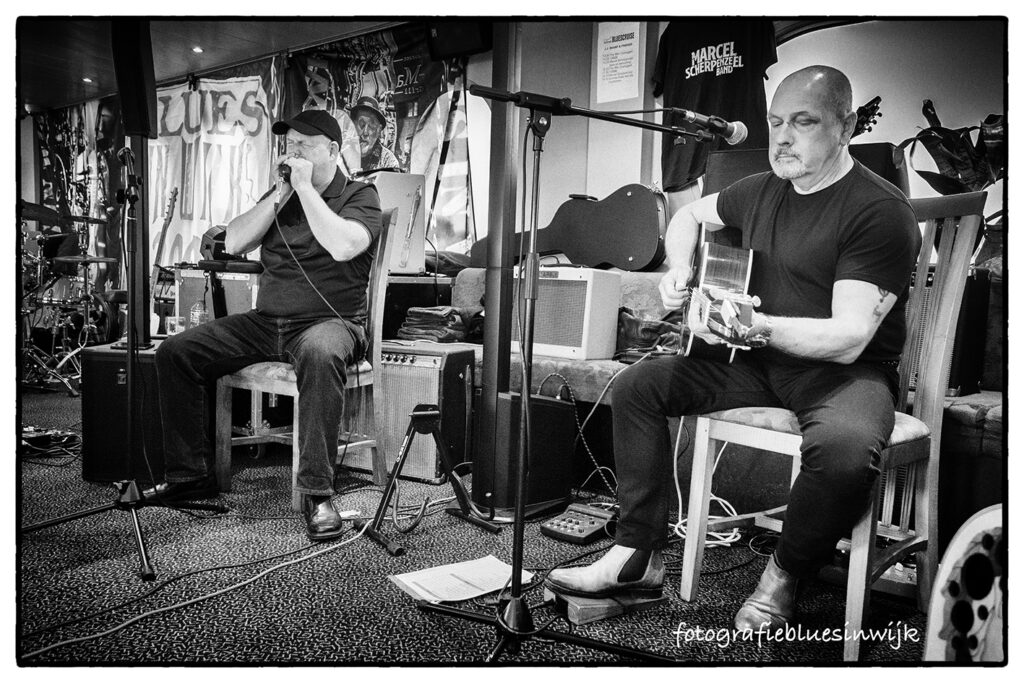 The Men Unplugged are Gerrit van de Spaan on guitar, voice and George Reijnders on the bluesharp. The duo has a sound all its own and plays honest songs with blues traditionals and their own work. Atmospheric blues with the sound of the old masters. Also no strangers in Wijk. In 2015 they stood during the BluesPubTour in café Ome Ko. 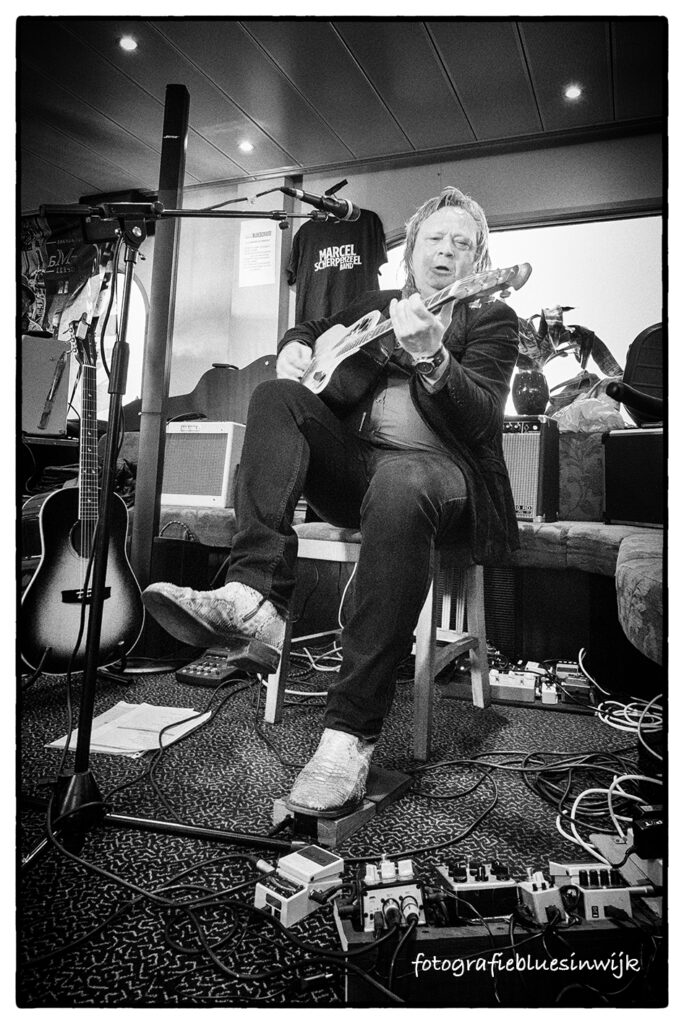 Marcel Scherpenzeel has been making music for about twenty years. It started with the Marcel Scherpenzeel Band, then came Wolfpin and from 2009 he toured all of Europe with the Band of Friends. In it he played with bassist Gerry McAvoy and Ted McKenna, former members of Rory Gallagher’s backing band. In 2015, they were in theater Calypso. McAvoy played with the Irishman for over twenty years and described Marcel as a guitarist who comes closest to Rory in his experience. Since 2020 Marcel has been touring the country again with his own band.

WHAT A PARTY IT BECAME!

After much preparation, Sunday morning October 24th was finally the day. At 09.30 the Salvinia was ready in the Wijkse Stadshaven and we could start setting up, preparing the stage, welcoming the musicians and everything else that goes with an event. Everyone was looking forward to it and as an extra cherry on the cake it was also just very nice sailing weather. Virtually no wind, sunshine and 13c outside temperature. After more than 1,5 years of Corona, we were finally allowed to have a nice blues party again. And a beautiful party it was with the 200 blues lovers, great musicians and a fantastic crew.  Below articles from Wijks Nieuws and BluesMagazine. More pictures and movies in our archive. Foundation Blues in Wijk was founded in 2009 by a bunch of enthusiastic blues fans and organizes about 10 bluese events a year in theater Calypso, in the catering industry, on the Lek, in living rooms and on outdoor stages.

The Blues river cruise is held on the river Lek and this year for the sixth time. Last year the cruise could not take place because of the Corona restrictions but fortunately the organization got the green light now. However, with a 75% capacity of 200 people, and participants had to be able to show a corona vaccination.

That the organization has arranged everything perfectly is immediately apparent when entering the ship Salvinia of shipping company Feenstra. In three blocks, in alphabetical order of last name, people spread out to enter the ship. This goes very smoothly and quickly. Departure is at 13.30 and at 19.30 one is back in Wijk bij Duurstede.

Roelof Hummel from BluesinWijk welcomes everyone and tells them that this is an anniversary cruise because exactly today, October 24, BluesinWijk exists 12½ years. In honor of that anniversary, every visitor will receive a CD with the volunteers’ favorite blues songs when they leave the ship. Nice gesture!!! 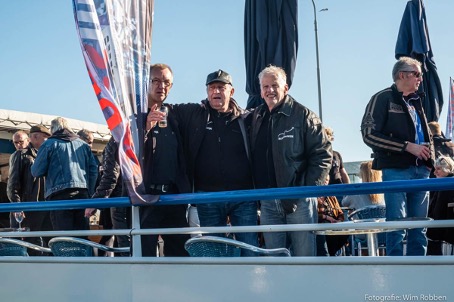 After the Salvinia casts off the mooring lines, The Men-Unplugged starts first. It consists of Gerrit van der Spaan on guitar and vocals and George Reijnders blues harp. It is a semi-acoustic duo and they play traditional classics such as Got My Mojo Working, House Of The Rising Sun, When My Guitar Gently Weeps, Going Up The Country, supplemented with their own songs. It’s a nice acoustic set. Very well played and the sound is nice and clear and perfectly tuned. Gerrit is a fine guitarist, has been playing since he was twelve and his singing is fine, the mouth harp playing of George Reijnders is beyond question. A wonderful set of three quarters of an hour until the lock at Amerongen. The audience thanks them with a heartfelt applause.

Not everyone is watching all the time, people are also enjoying the truly beautiful weather on deck and the sound of the performances can be heard perfectly there too. What a stroke of luck, the most beautiful day of the month and that on the anniversary cruise! 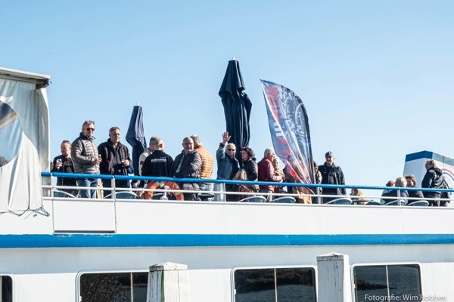 The band begins with the delightful shuffle I can Make Everything Allright and it’s as if they haven’t been away for five years. The familiar 12BBB sound, with those wonderful grooves, beautiful voice, solid bass, tight drums and great guitar work is still there. (Yours truly was at the recordings for Bluesmoose Radio and I hear the same great sound. Those recordings have been viewed millions of times worldwide and are getting very positive feedback. See also article about the 12BBB in the last Blues newspaper with detailed information).One plays a fantastic set with Standing on Melting Ice, Down to The Station, The Thrill Has Gone, He’s a Bluesman, Life Is Hardand everything is in that set: shuffle, slow blues, uptempo, funkyblues. JJ. Sharp talks the songs together pleasantly and interacts well with the audience. Then it immediately continues on the other stage with guitarist/singer Marcel Scherpenzeel, Scherpenzeel is his uncle! It will be another fine performance, it is acoustic and Marcel’s voice comes across well because of the perfectly tuned sound. And that voice is good this afternoon! He starts the set with Cradle Rock. He tells us that he played eight years with Band Of Friends with Gerry McAvoy and the unfortunately deceased Ted McKenna, former members of the band of Rory Gallagher. He quit last year but still joins in when someone is sick. Covers such as Ring Of Fire, Rockin’ In A Free World, Foxy Lady and the sing-along Beasts pass by.

Then a fine buffet dinner is served in the restaurant and it’s intermission. After yours truly has eaten and is heading towards the stage, The Men Unplugged has been going on for a while and their second set is almost over. In total there is almost six hours of music and then you sometimes miss something…. 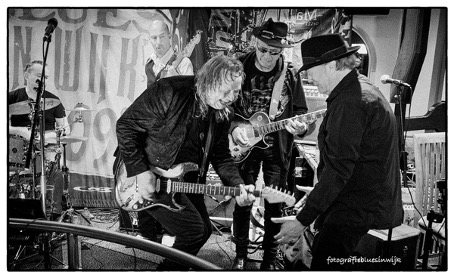 The 12BBB begins their second set with Twelve Bar Blues,Wang Dang Doodle, Spoonful and others and it is just like the first set great. Then, at 6:15 p.m., Marcel Scherpenzeel, now with electric guitar, joins the band and it starts to get really great with wonderful, drawn-out jams. The enjoyment of all the musicians is overwhelming. They are real jams because between songs they discuss how and what to play. Jan or Marcel regularly assign someone to play a guitar or mouth harp solo. George Reijnders and Gerrit van der Spaan also join in. Songs like Tore Down, Trouble Trouble, Can’t Get Enough Of That Girl, Key To Your Heart pass by in wonderfully long versions with enough room for each musician to excel. They close with the classic Sweet Home Alabama and then the ship has long been docked again and until 20.00 they play on and then after about six hours of music, the cruise is over. Conclusie:It was fantastic. Everything was right today: perfect organization, great musicians, top sound, great food and very friendly and good-humored audience. As a dessert the weather was beautiful. All in all a very successful blues river cruise thanks to BluesinWijk.

(P.S.: Actually, it was not my intention to write a review, but it was so much fun from the start that I put something on paper anyway. Unprepared and I hope that names and songs are correct! If not, excuse). 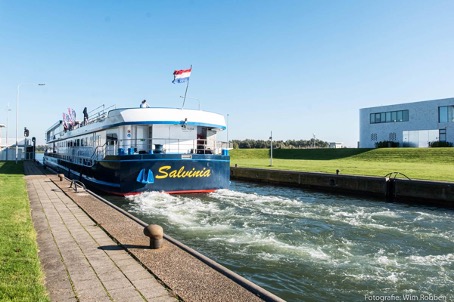