Hopping from pub to pub.

Saturday, November 30, 2019 the pubs in the city center of Wijk will be filled with the blues again. For the 9th times Foundation Blues in Wijk and the hospitality industry together organize the now traditional Wijk BluesPubTour. Since the first edition in 2010, this blues event has been a great success with about 1200 visitors from Wijk and the surrounding area. Blues fans experience the variety of blues styles, relaxed atmosphere, and short walking distances as particularly attractive. The festival opens at half past two in the E&E Retirement home, at four o’clock café de Vaert and theatre Calypso take over, and from six o’clock onwards one can eat in five restaurants with a blues concert. After dinner, it continues at 8 pm in the Calypso theatre and De Engel and from 9 pm onwards, the pubs also start to get into full swing with blues bands until deep into the night. During the day, blues on the town carillon. So there is plenty to do. More information on www.bluesinwijk.nl. In all participating pubs and restaurants you will find flyers with playing times and a map. Admission is free.

Blues in the afternoon. The blues pub tour kicks off at 14.30 with a performance by Gumbo & the Monk in the grand café of the E&E Retirement Home. For years a cheerful, successful and fun afternoon, where the elderly of Wijk bij Duurstede sing along, clap and even dance. Afterwards, from 16.00 hours, the Muddy Waters Tribute Band will perform in the Calypso theatre. Blues during dinner. Between 18.00 and 21.00 it is time for the inner man. At five places, you can combine food and blues. Sweet Mary Jane plays at Café Ome Ko, Gumbo & the Monk at Mazi Mas, Robbert Duijf at Pepe’s Cucina, Dave and Janne of the Dave Warmerdam Band play for an hour at de Engel and at the Veldpoort there is an extra long performance (until 22.00 hrs) by The Bluetails. Blues in the evening.
From 20.00 hrs Ralph de Jongh XL ft Ruben Hoeke in theatre Calypso and then from 21.00 hrs the evening programme starts in the cafés. Within a radius of less than 500 metres there are six cafés. Around 21.00 hours, the Dave Warmerdam Band in De Engel will expand to a full band and in café ‘t Hoff, Talking Blues & the Delta Ladiesnight will kick off. After ten o’clock the Rumble Rousers will rock ‘n’ roll, swing, rockabilly and blues in café de Vaert, the Detonics will play in café BijDie2, the Hoodoo Monks in Eethuys Dorestad and café Ome Ko the Stef Paglia Trio (B).

Blues in the night.
After midnight, the blues continues until about one o’clock in cafés de Vaert, BijDie2 and Ome Ko. In the Pakhuis, the roof comes off at twelve with the Ray Stepien Trio. They close the pub crawl with solid and steaming blues.

Closing times of pubs.
For all pubs and restaurants, the rule is that you can enter until 01.30, after which the door closes. Inside is inside, you can get out whenever you want, but hopping from pub to pub is then over. 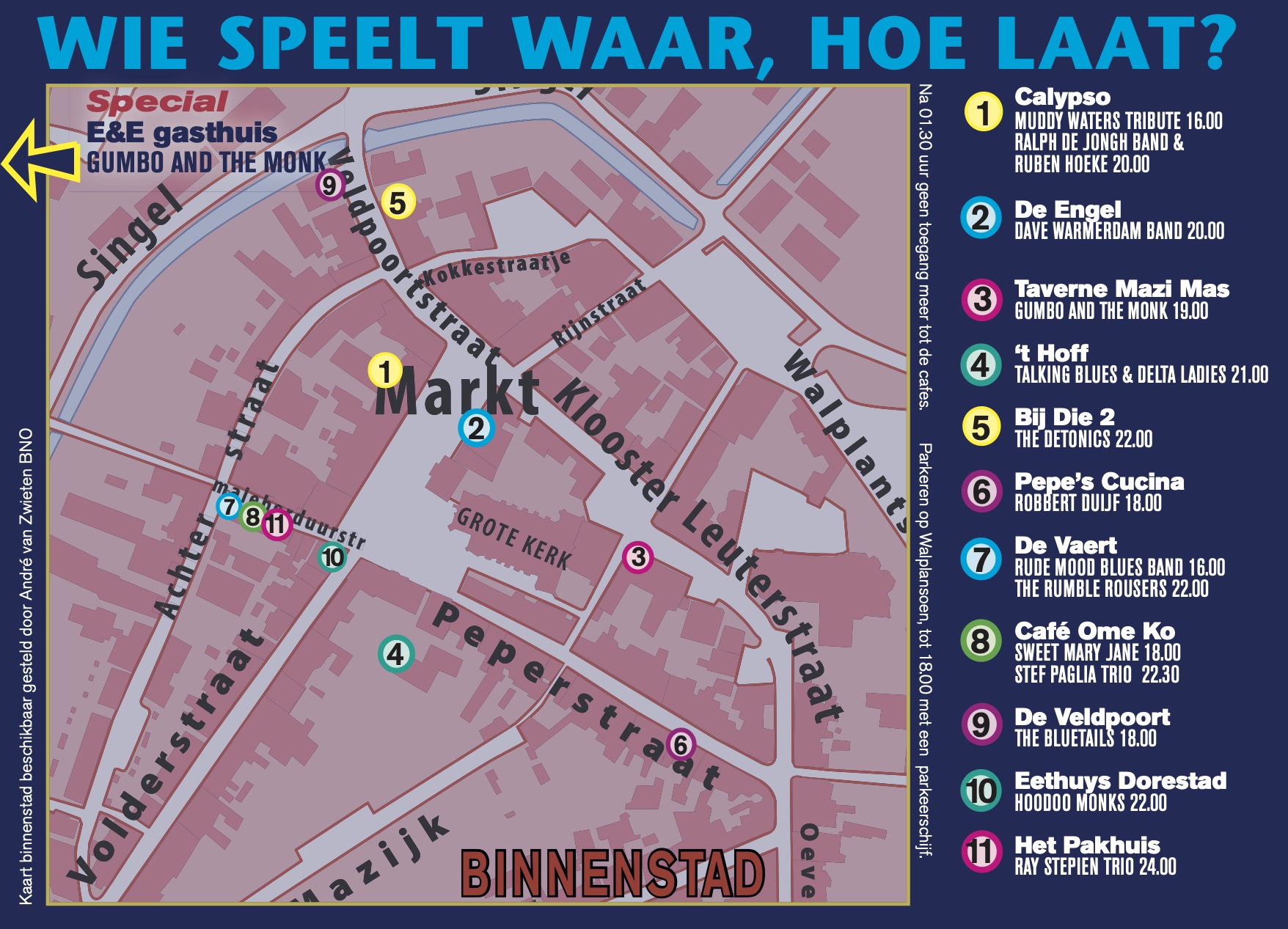 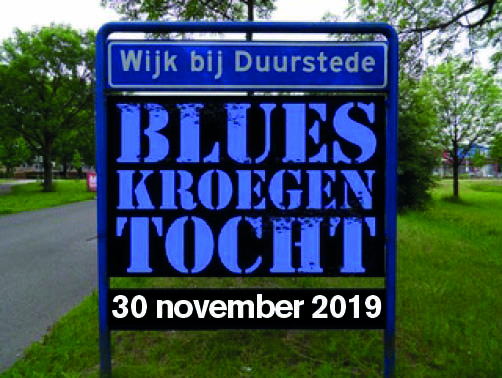 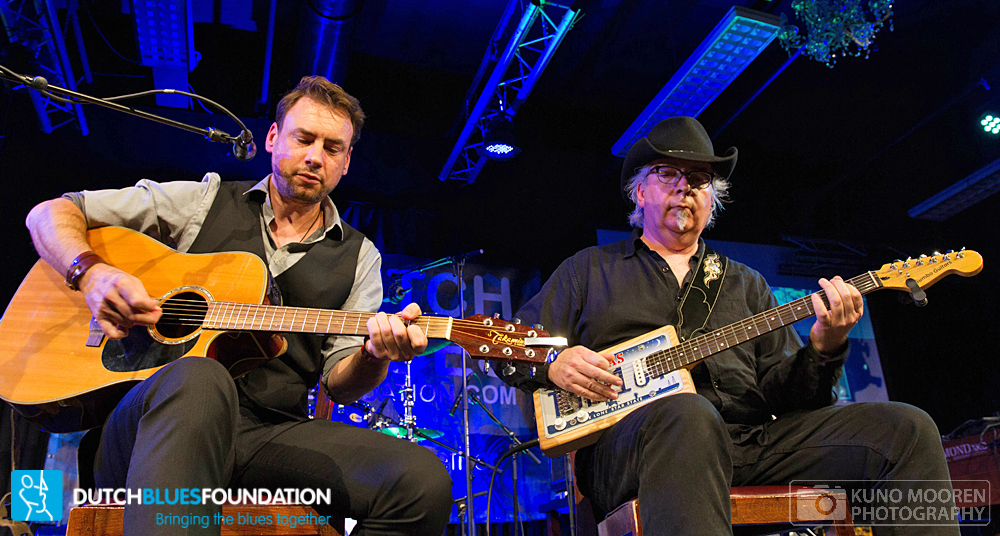 Gumbo and the Monk will kick off the blues pub crawl in the Ewout and Elisabeth Retirement home. It is a duo consisting of Fabian Schrama and Servaas Bollen. Both play guitar and vocals. In 2018 they were in the finals of the Dutch Blues Challenge with a raw sound of the Mississippi Delta Blues. They do this on handmade instruments like the Cigar Box and manage to captivate and engage the audience.

The band was founded in 2016 by Robert Fossen, well known in the blues world. He won the Dutch Blues Challenge in 2012 and 2016 and in 2014 he received a Dutch Blues Award.  This year, as part of the 60th anniversary of the song “Hoochie Coochie Man” by Muddy Waters, they are doing the Hoochie Coochie Tour. This 6-piece band may be a tribute band, but with their own sound and their primary goal is to keep the music of Muddy Waters alive and honoured. Band members: Robbert Fossen vocals and guitar, Lothar Wijnvoord guitar, Ivan Schilder piano, harmonica, Lars Hoogland drums, Dirk Wagensveld bass and Thomas Toussaint harmonica (Dutch Blues Award in 2016). An all-round blues band with Martine on vocals, Wim on guitar, Michiel on bass and Marco on drums. They have been ‘on the road’ for about 30 years now, performing in just about every blues bar between Goes and Delfzijl, at various festivals, for motor clubs and in a prison. Exactly ten years ago, their first guitarist and good friend Gerrit-Jan Evers died and with this performance they want to pay tribute to him and commemorate him. 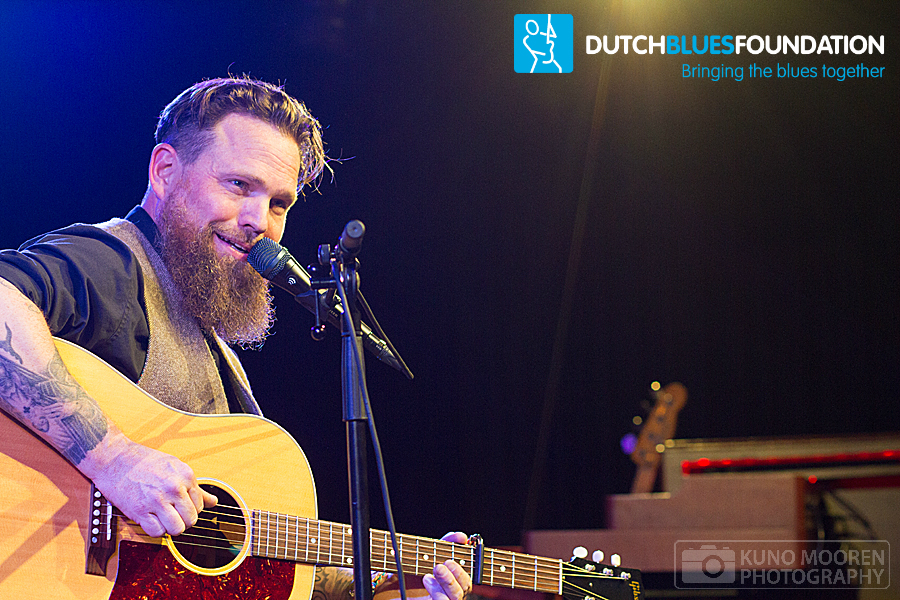 At first glance, Robbert looks like a troubadour with his beard and inseparable cap, but he is anything but. During the Dutch Blues Challenge earlier this year, he was bursting with emotion. He became the winner in the category “solo artists” and will go to the International Blues Challenge in Memphis, America in January. Robbert has a powerful, full voice and his guitar playing does not lie. In March this year, he released his first solo album. It is definitely worthwhile to pay him a visit at Restaurant Pépé’s. 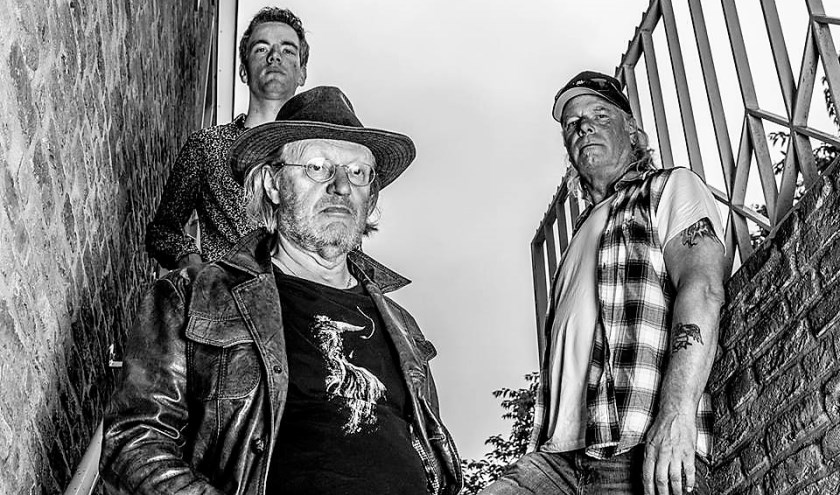 Frontman Fred van Willigen takes his fellow musicians, Ton Boekelman on bass & vocals and Lars van der Weiden on drums & vocals, in tow and it would be odd if the audience did not join in. The feet will be on the floor!  These seasoned musicians have been welcome guests on stages throughout the Netherlands.  The men are not surprised by a little gene more or less.  Some of the names of the artists that come along include the Irish heroes Rory Gallagher, Thin Lizzy and Gary Moore, but also Stevie Ray Vaughan, Buddy Guy, Bobby “Blue” Band, Jimi Hendrix, Bob Dylan and Eric Clapton are in the repertoire. Their approach is simple: ‘all you can eat’! Delicious blues in the true sense of the word as it might have sounded in the Mississippi delta. A Rotterdam blues trio, that had to cancel last year at the last minute in the Veldpoort, but they are back.  They play Chicago Delta Blues. With quiet songs, like ‘Going to California’, they know how to create a relaxed atmosphere in bars and restaurants. The Bluetails consist of: Dave Wessels on drums, Henk Wessels on bass and Alex Jr. on guitar and vocals. Ralph de Jongh has been a sensation in the Dutch blues scene for years. Not only to hear, but also to see. He plays with a relentless and amazing energy that comes from every pore of his body. Every performance invariably turns into a great blues party. Moreover, he produces an inimitable amount of CDs with the most intense music.  Ralph comes to Wijk with the 8-man XL formation with Arie Verhaar on drums, Rogier Hemmes on bass, including blazers (Joost Verbraak en Arend Bouwmeester), Ylvalie Dik and Moon Anderson backing vocals en special guest none other than guitar virtuoso Ruben Hoeke. A full stage, but nobody gets in each other’s way, it’s always good and never the same. 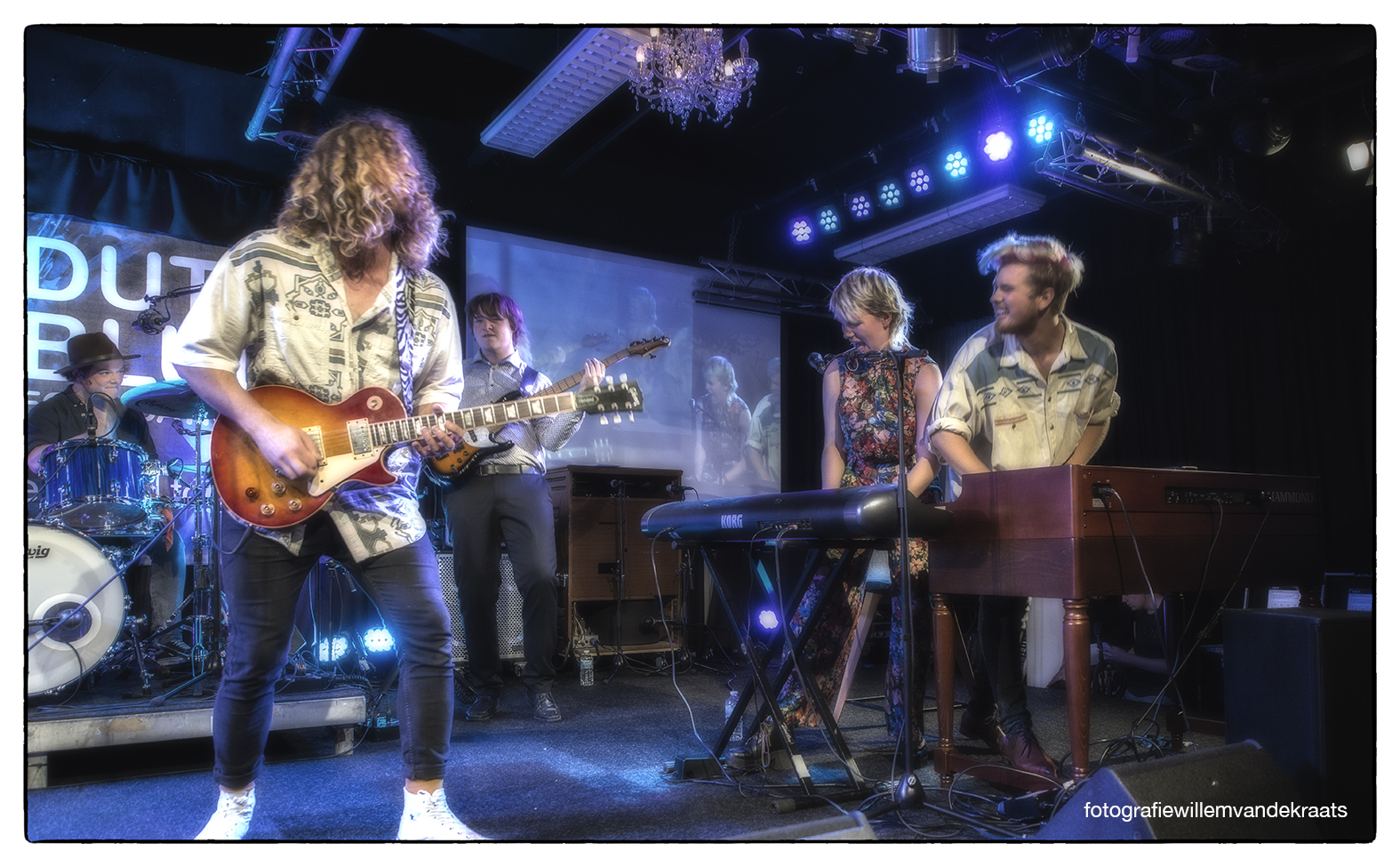 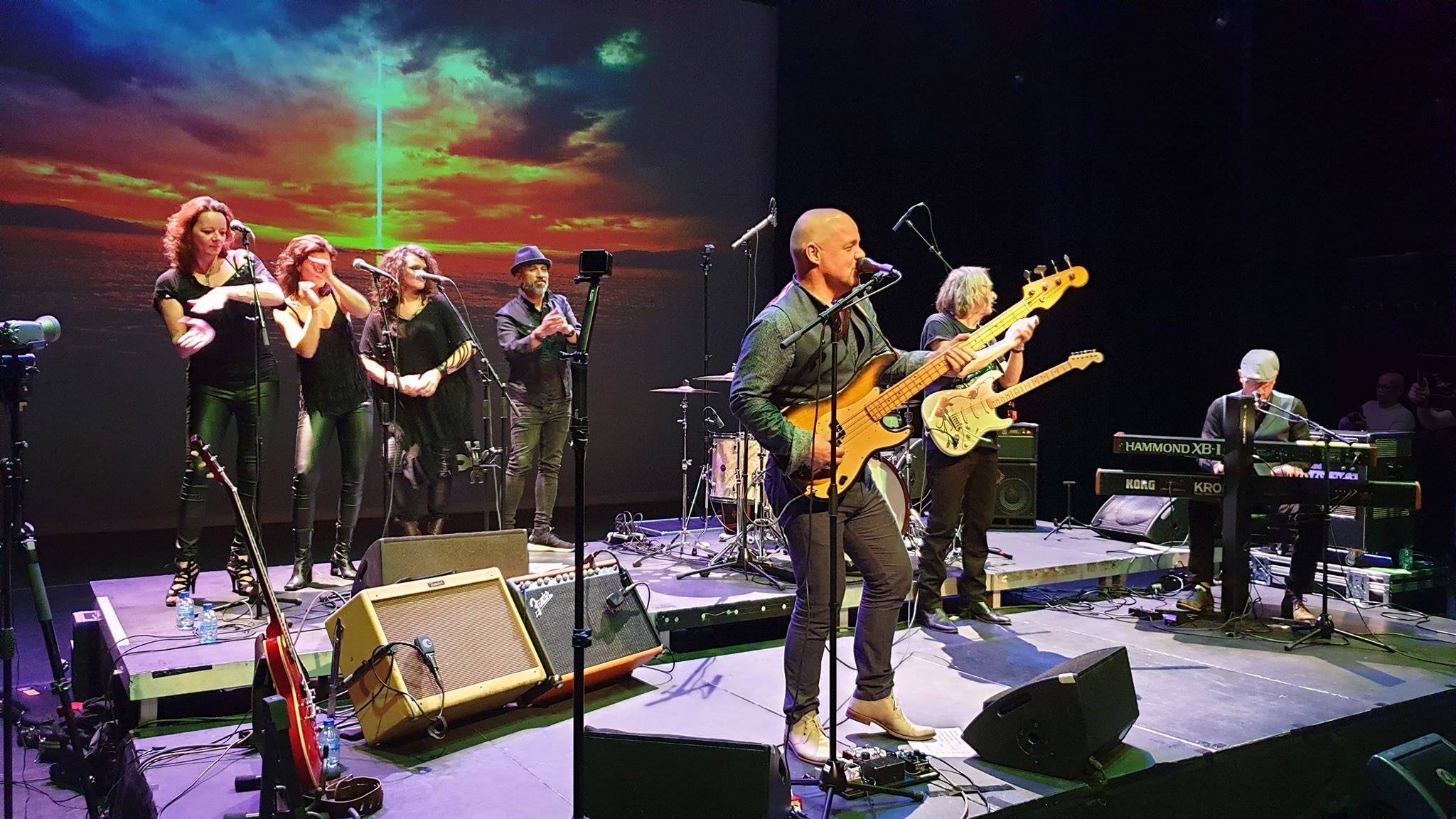 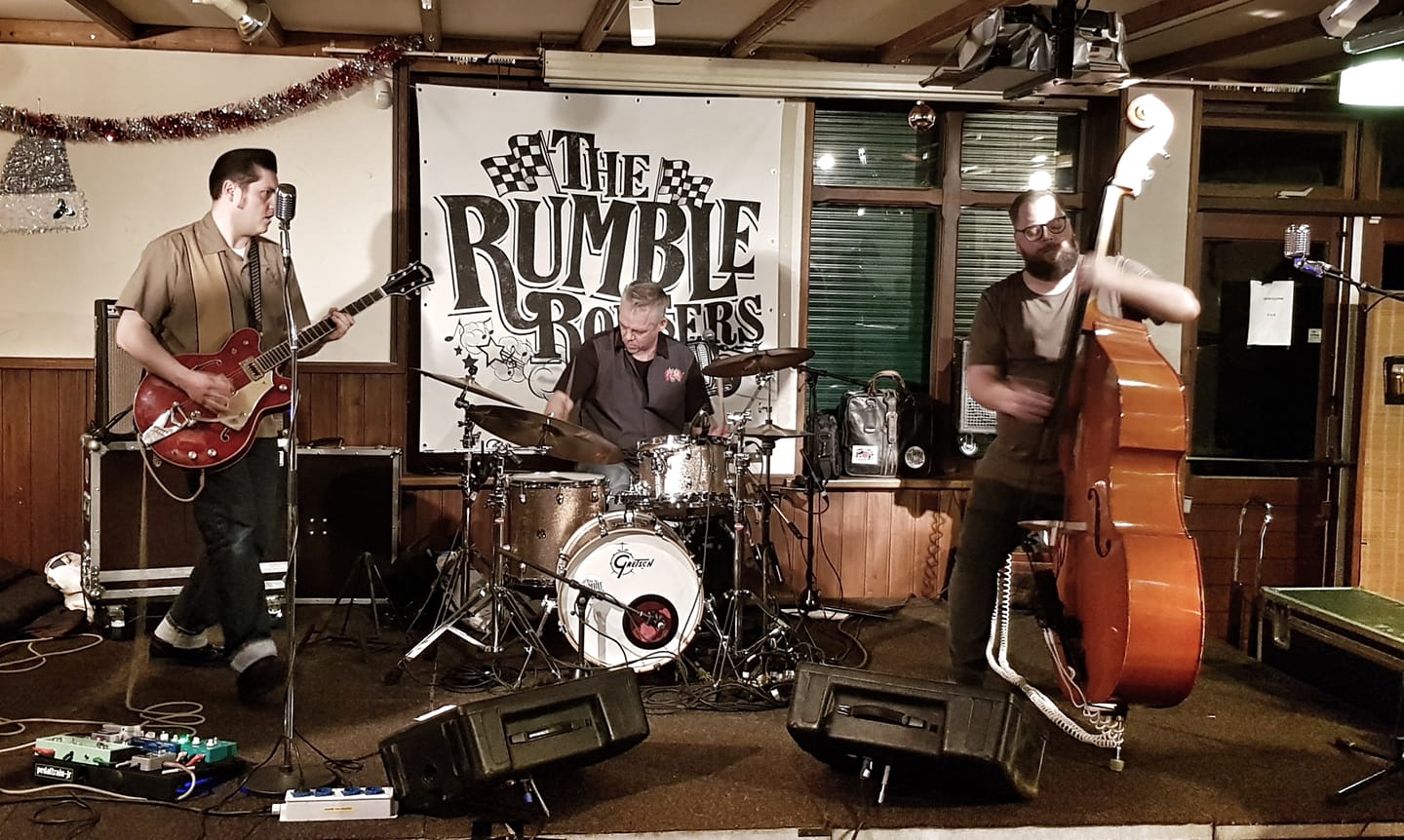 A real rockabilly formation in the tradition of the fifties with only one goal in mind: playing nice and fat Rock ‘n Roll with a repertoire that is full of great hits from the past.  With a broad repertoire of Rock ‘n Roll, Rockabilly and Surf covers they bring a surprisingly varied evening filling performance.  A feast of recognition for every older lover! For young people a wonderful introduction to the music where their parents went wild. The Rumble Rousers are: Arjan, guitar and vocals, Harry, double bass and backing vocals and Wilfred on drums.  They are no strangers to the Dutch rock ‘n roll and rockabilly scene.  As they say themselves: “We don’t write biographies, we play Rock ‘n Roll”! That’s why The Rumble Rousers are a band for many occasions: Do you want to swing? Then find them at Café De Vaert during the blues pub crawl and go crazy! 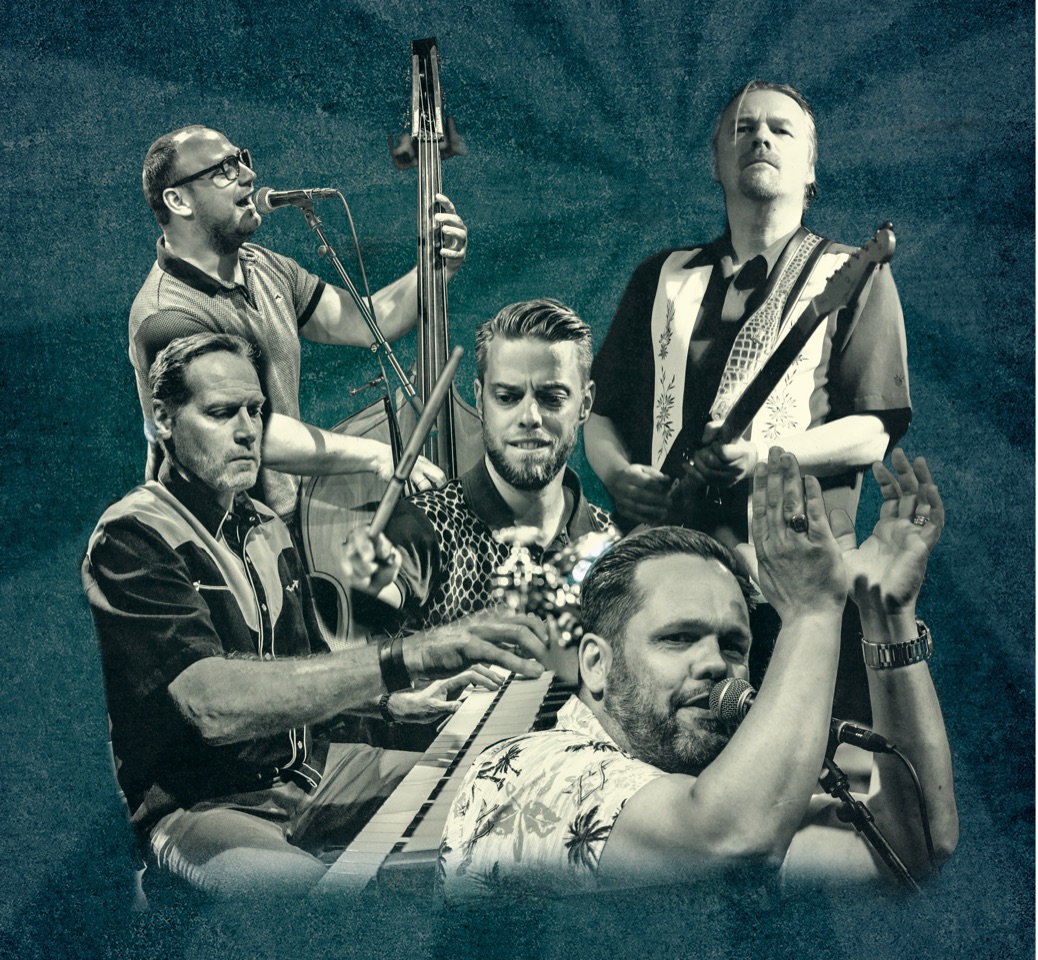 A fantastic blues band. In 2016 they won the Dutch Blues Challenge and in 2017 they reached the semi-finals in Memphis. You have to be in good shape to make it that far. They play blues inspired by the early Westcoast blues, it’s mostly Swing and Boogie with excursions to Rumba or slow blues. With their “detonic” blues they give steaming performances time and time again. Kars van Nus, vocals and bluesharp, Raymond Nijenhuis, guitar, Raimond de Nijs, piano/hammond, Mathijs Roks, drums, René Leijtens, bass and backing vocals. Detonics are ready to rock! We have had them in Wijk before, simply because they are such a fine energetic act. Initially a duo, since 2015 with the three of them. Guitarist Benito Berndsen (BB Burnette), drummer Peter van der Zanden (Pit Maypole) and frontman Erik van Tilburg (Papa T) who takes care of the vocals and the harmonica. Last year they had to skip the Kroegentocht because of personal circumstances of Erik, but they are back and how! The trio keeps up a good pace during their performances. Van Tilburg almost blows his harp to pieces, Maypole beats his drums and Benito follows everything with his tight guitar work. So it’s great to see these energetic men at work. 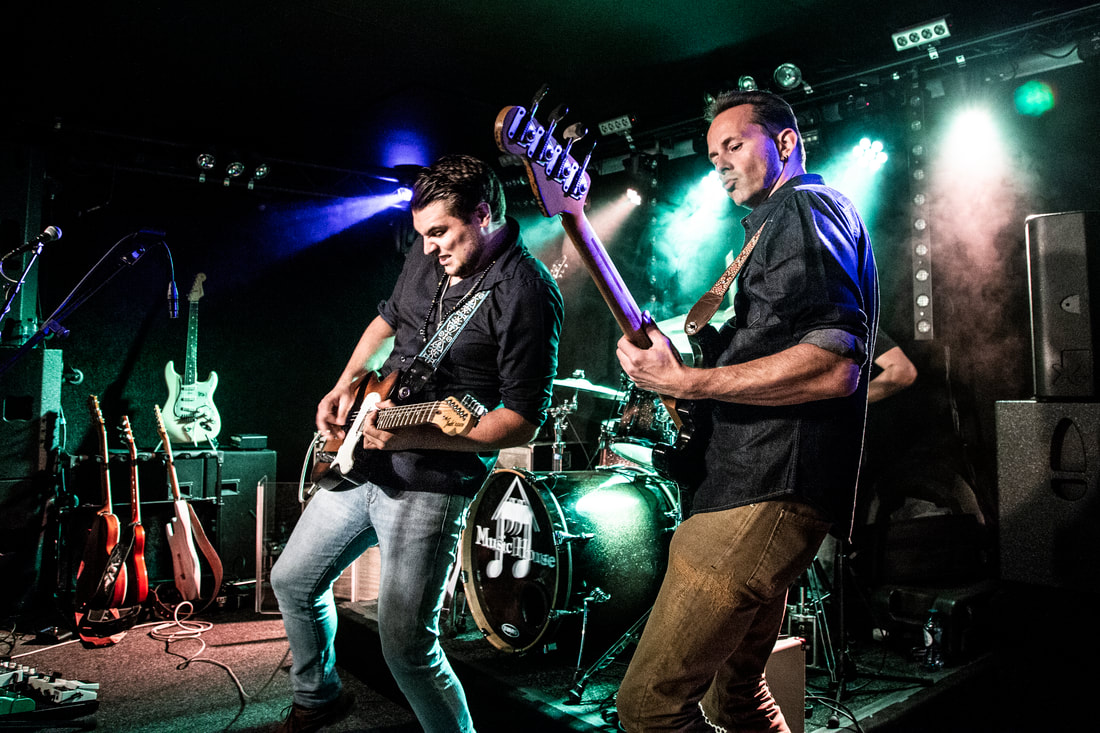 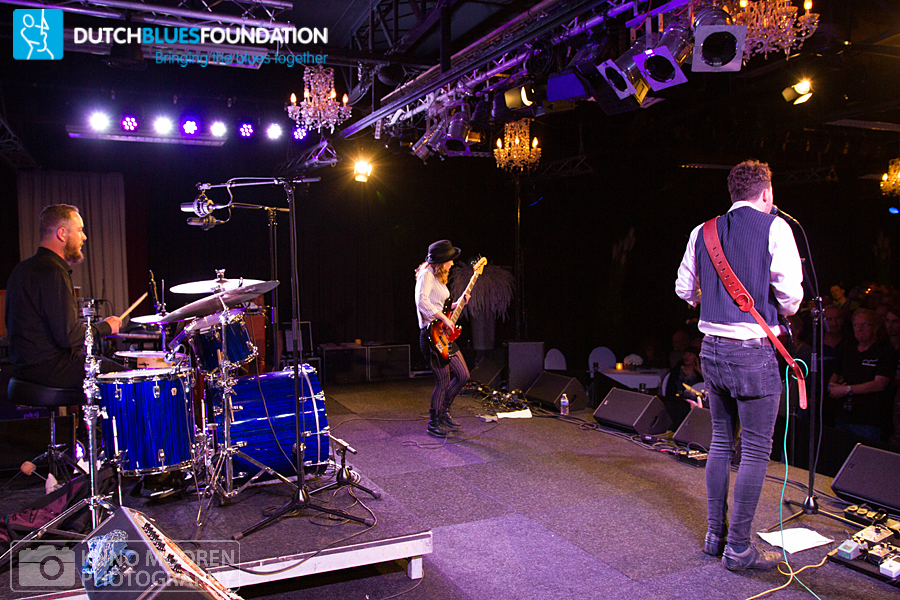