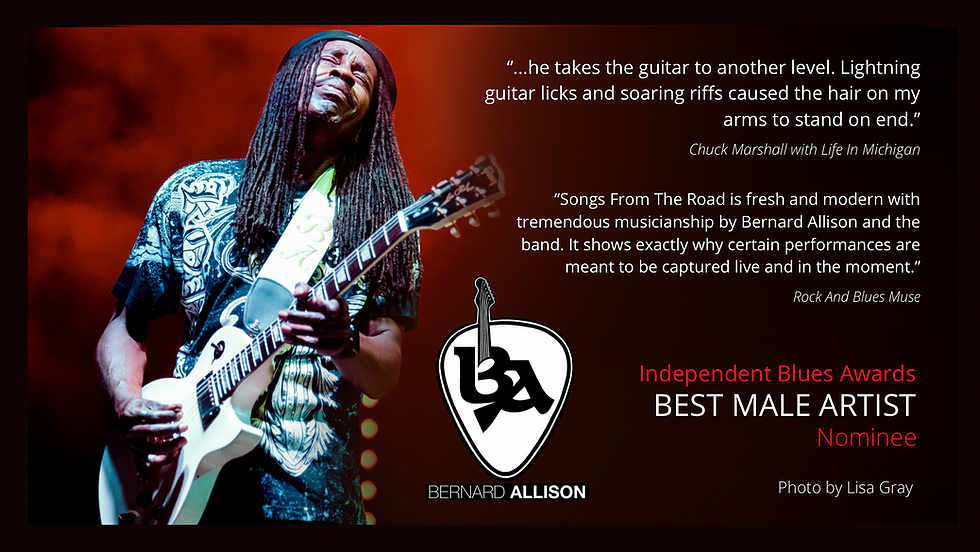 After canceling twice due to Corona, we will try again in January 2022 with this great American blues act.

The great Chicago bluesman Luther Allison lived by a simple philosophy that he was happy to share (“Leave your ego, play the music, love the people). Now twenty-three years after his passing the great man would surely be thrilled to hear Bernard Allison’s Songs From The Road, and proud to find his ferociously talented son is sworn to the same mission bringing, soul-soaked, all-guns-blazing blues to audiences who need it more than ever.

Released in January 2020 as a CD/DVD set on Ruf Records, Songs From The Road is a live snapshot so raw and real that hearing it feels like hanging off the security barrier of Dortmund’s Musiktheater Piano club when Bernard and his crack-squad band hit town last October 23rd. With an A-list crew on-hand – and a dynamic mix from industry legend Jim Gaines – this immersive recording catches every last flash of virtuosity, bead of sweat and drop of atmosphere. “I actually prefer live performances,” says Bernard, “because you can communicate and interact with the audience. I basically feed off of that energy, combined with my group’s talent and personalities.”

​Since he embarked on his acclaimed solo career with 1990’s The Next Generation, Bernard’s studio catalogue has been heavy with highlights, and that night in Germany, every fan in the house got something off their wish-list. This prolific songwriter reminded us that his recent output is his strongest to date, with cuts from last year’s acclaimed Let It Go album including Night Train, Cruisin For A Bluesin, Same Ole Feeling, Backdoor Man and the wound-licking slow-blues of You’re Gonna Need Me. “We showed more mature songwriting with that album,” he nods.

​But Bernard is happy to embrace his past glories, too, on a setlist that digs up his studio catalogue for diamonds. From 1998’s Times Are Changing album, there’s The Way Love Was Meant To Be and the funky strut of I Can’t Get You Out Of My Head. From 2000’s Across The Water, there’s Meet Me Half Way and the powerhouse, fingertwist blues-rock of feels Kinda Funny.

After stopping off for the grooving title track from 2002’s Storms Of Life, Bernard pulls out Stay With Me Tonight from 2005’s Higher Power, and mines 2015’s In The Mix for fan-favourites Call Me Momma and Something’s Wrong. Oldest of all – and a treat for long-standing fans – is Let’s Try It Again. Borrowed from his father’s classic 1984 album, Life Is A Bitch, it’s a moment that brings Allison Jr’s story full circle, reminding us of his own formative years, when he jammed with Luther as a kid, broke out in the band of Koko Taylor and frequently cut heads onstage with close friend Stevie Ray Vaughan.

​You might know the songs – but you don’t know these interpretations. With Bernard leading the lineup on vocals and searing lead guitar, backed by Dylan Salfer (guitar), George Moye (bass), Mario Dawson (drums) and José James (sax/percussion), this is a live band whose chemistry lets them stretch out and shake up these classic songs. “Fans that know our choice of songs will notice the change in arrangements that highlight my current band members,” says Bernard. “As opposed to hearing the studio versions, which normally feature my vocals and guitar. We’re the Bernard Allison Group and we show our unity night after night across the world. It’s ‘the Allison way’…”

​On Songs From The Road, the result is a glorious exchange of energy between band and crowd – and evidence that Luther’s old philosophy is burning brighter than ever. “Our shows aren’t like going to the movies and staring at the big screen,” Bernard considers. “We’re there for the people to enjoy each other’s stories for the evening.”